Casey has always been as compliant as he is colorful. That's why his owner, Sharon Snyder, figured it was her fault when the 8-year-old leopard Appaloosa was reluctant to pick up the right-lead lope one day last September.

Having cleaned up at the Appaloosa Horse Club Nationals in early July, they were preparing for The ApHC World Show in November. Sharon downplays her own riding abilities, but with Casey's talents and temperament, says, "We really had a good chance at winning events in our division."

Ascribing the loping incident to pilot error and never having had a soundness issue with Casey before, Sharon gave it little thought. But the next day while schooling trail obstacles, an odd sensation occurred when Casey stepped over poles. "Does he look funny to you?" trainer Dale Sullens asked Sharon.

"It was like he was hesitating to put his foot back down after it crossed the pole," Sharon explains. While he wasn't noticeably lame, trainer and owner agreed something was amiss. Two months of diagnostic testing eventually determined a right hind suspensory strain, compounded by scar tissue.

Surgery Instead of the Big Show

Instead of the Appaloosa World Show in November, it was surgery in December to address the built-up scar tissue. "It was devastating," says Sharon, who lives in the Fort Worth, Texas area.

In hindsight, Sharon is sure that the strain occurred back in July of 2019. The multi-talented Casey was competing in Hunter division jumping classes, which he swept even though his best divisions are Trail and Western Pleasure. Sharon regrets not recognizing the issue right away, but credits herself with making a smart decision when stall rest was prescribed: purchasing ComfortStall Sealed Orthopedic flooring for Casey at her home barn.

To prevent further injury, Casey's veterinarian wanted to limit his movement during stall rest while a diagnosis was sought. Sharon chose her barn's smallest stall, a 12' by 15', for the ComfortStall installation.

"I really feel like that went a long way in keeping the pressure off his leg while we awaited a diagnosis," Sharon explains. ComfortStall's layer of proprietary foam provides cushion, energy return and a comfortable, safe place for the horse.

"I believe it really helped him not injure himself any further because he was constantly in a comfortable place. He was never on hard ground and he never had to move shavings around to get comfortable. Everything was perfect with that flooring."

Like a gymnasium mat with its balance of stability and give, the ComfortStall surface requires the horse to make tiny muscle movements to adjust his balance while standing. In physical therapy terms, that's called "proprioception" and it's considered crucial to muscle and joint recovery in people and horses--whether from injuries like Casey's or the normal wear and tear of exercise. Sharon thinks this benefit ensured that Casey went into his eventual surgery stronger, enabling him to come out of it stronger, too. 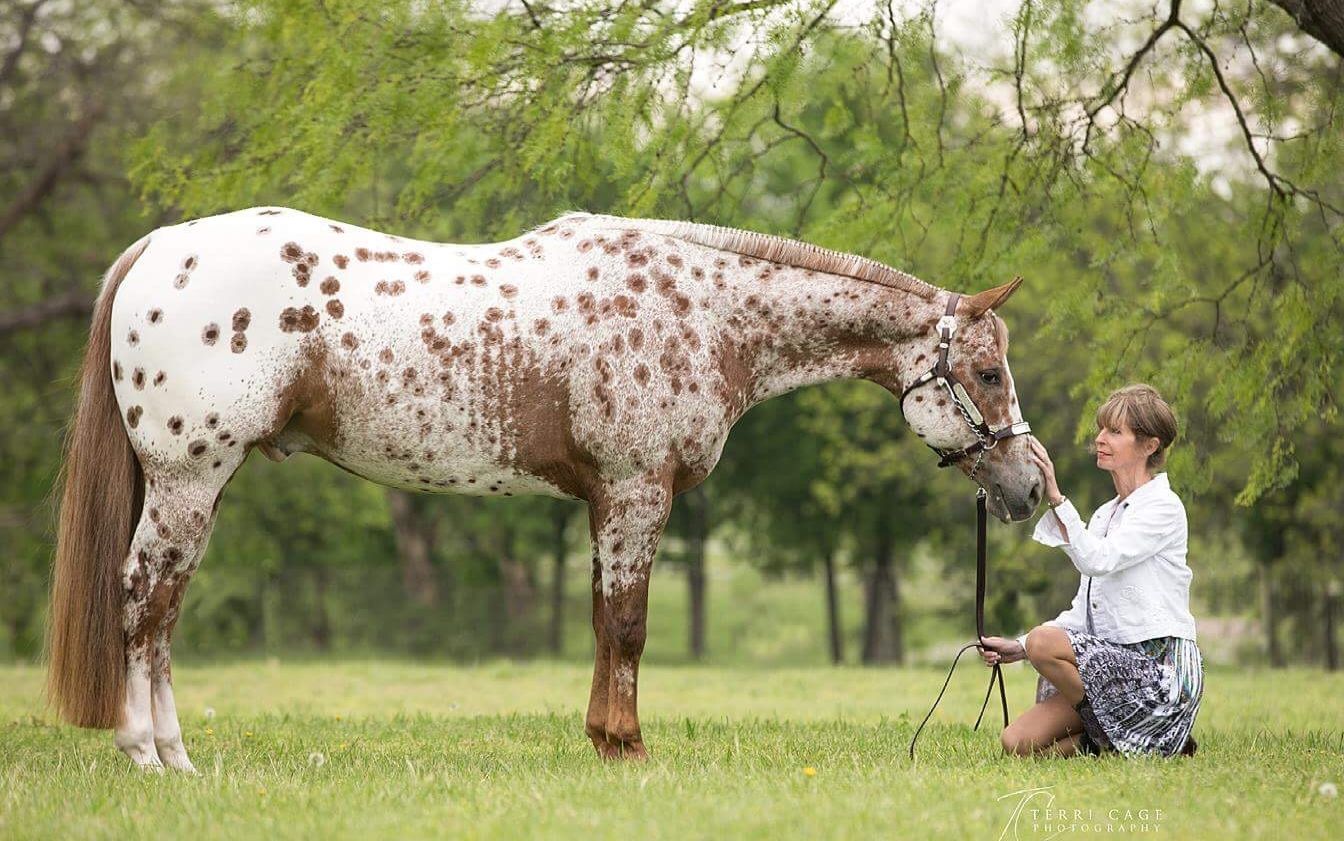 After his December surgery by Cameron Stoudt, DVM, and his regular vet, Josh Darnell, DVM, Casey had three months of rehab with equine therapist Sherry Johnson, DVM. Sharon is grateful to this team at LeMesa Equine Lameness Center in Pilot Point, Texas, and Equine Sports Medicine and Rehabilitation in Whitesboro, Texas.

I know the combination of the veterinarians, staff and ComfortStall all made a difference in his recovery!"

A Stand Out Horse

Casey isn't Sharon's only show steed. She loves them all, but he stands out among them. Registered as Hunting The Bar, Casey is by the famous Appaloosa sire, Zippo's Scotch Bar. His dam is What A Dandy Hunter, who is by the world famous ApHC sire, The Hunter. It's a pedigree that inspired Sharon to sweet talk Casey's previous owner into parting with the then 4-year-old, who wasn't for sale at the time. He's grown into every dream Sharon had for him. 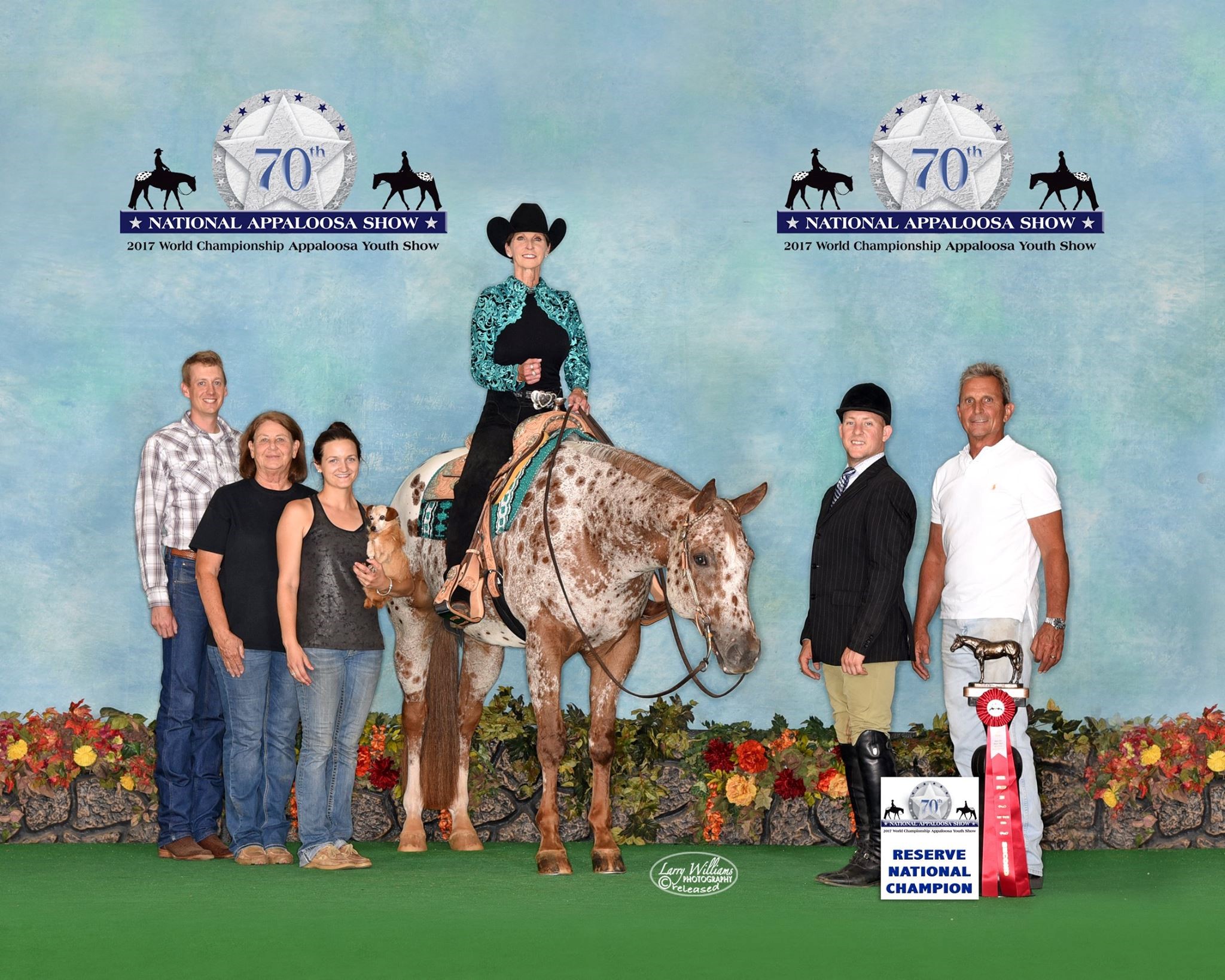 "I'm not that good," says the amateur competitor of her riding skills. She attributes all of their Trail and Western Pleasure wins to Casey and her trainer's help. Dropping out of last year's Worlds was a heartbreaker, she acknowledges. But Casey is young, back in work and regaining his form and fitness every day. Once the horse show circuit can resume, Sharon is confident of loping right back onto the path towards their Appaloosa World Show dream. "I know the combination of the veterinarians, staff and ComfortStall all made a difference in his recovery!"