Debbie Stephens: Top show jumper was a devoted hay steamer well before it was a hot idea worldwide.

Debbie Stephens remembers when Haygain Hay Steamers were "unheard of" on the top show jumping circuit that is her milieu. Today, the majority of elite contenders, in the U.S. and Europe, consider steaming critical to their horse's health and performance. A veteran U.S. Nations Cup team rider and famous for clearing a 7'8" High Jump in 1982, Debbie has been a believer since she first heard about hay steaming.

Among those fantastic equestrians who blazed a trail for women show jumpers and still a force in the big ring, Debbie is happy to have blazed the trail for hay steaming, too.

"Horses eat two things: hay and grain," she explains. "Both have to be top quality." Yet, getting good quality hay consistently is difficult. Even hay of excellent nutrient content can be poor quality because of dust, mold, bacteria and fungi that accumulate during harvesting, transporting and storage.

Debbie is a stickler about hay quality. Hay for the 23 horses in her Centennial Farm in the Tampa Bay area's Palmetto is stored in an air-conditioned barn. Then it's steamed for every horse -- from babies in her breeding program to the stars of her jumping string and training client horses.

High-temperature hay steaming was developed in 2009 to rid hay of inhalable particles that infiltrate and irritate the upper airway and lungs. Debbie's anecdotal experience corroborates extensive science on Haygain Hay Steaming, including its ability to reduce the risk of Inflammatory Airway Disease by 65%. That is because Haygain steaming rids up to 99% of the dust, mold, bacteria and allergens in hay.

"I can't think of one of our horses developing any respiratory problems," Debbie reflects of her eight or nine years of steaming hay. She recognized and promoted its benefits well before current veterinary advances that identify respiratory challenges as one of the main performance limiters in otherwise sound horses.

She sees steaming's other benefits, too. "Nobody eats dry oatmeal," Debbie says of the appeal of moist, steamed hay over dry hay. Steaming also adds water to the horse's diet, helping with digestion and reducing the risk of impactions.

A half-bale HG600 steamer runs much of the day at Centennial Farm and another HG600 is Debbie's road warrior during frequent tournament travel. "They are indestructible," she notes. "We steam at night, then put the hay in a clean wheelbarrow and throw a clean tarp over it. We steam enough so that every horse can get their fresh, steamed hay at the same time in the morning." Stored this way, steamed hay retains its healthy, clean state for at least 24 hours, often longer.

In the beginning, Debbie and her staff fielded frequent questions about the mysterious black box they wheeled off the trailer and into the show barn aisle. Not so much anymore since so many have experienced steamed hay's benefits for their own horses.

For those who still ask what she thinks of Haygain, Debbie has an answer and a suggestion: "I couldn't live without it" and "Just order one!" 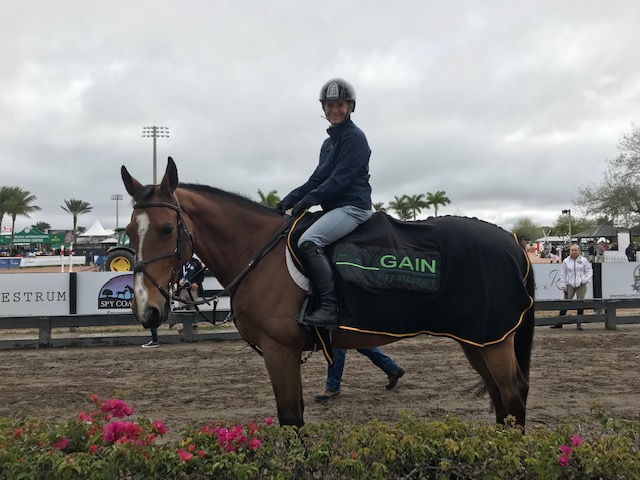