Easing Into The World | Haygain USA

Easing Into the World

Young stable owner Emma Whillans and Delfine 3 were both new to the foaling experience. For a brief period late on Saturday of Memorial Day Weekend, Emma was sure something was wrong. "Della" paced, spun and reared in her stall, all uncharacteristic behavior for the former Junior Jumper star. "I knew something was wrong."

In constant contact with her reproductive veterinarian as she monitored the proceedings, Emma had tested the pH level of Della's milk. The 7.5 reading indicated it was very unlikely the baby would arrive that night.

Barely half an hour later, it was equally clear that nothing was wrong at all. Nature ran its course as Della settled herself down emotionally, then threw herself down on the floor of her stall. Several contractions later, out slid a healthy foal, Unico ESH, by the For Pleasure sire Findus.

The actual floor onto which Della threw herself and "Uno" emerged doesn't seem a typical talking point in the magical moments surrounding a new horse's arrival. "Yet ComfortStall must have been mentioned four or five times that night," Emma relays.

The hunter/jumper trainer prioritized the unique flooring as she began planning the Florida training facility that opened for business last July. She started with 16 stalls featuring ComfortStall Orthopedic Sealed Flooring, and recently added eight in a separate barn. Two of those were modified as a foaling stall.

As Emma predicted, ComfortStall has helped several of her boarders' horses. An Andalusian with an arthritic fetlock and a Holsteiner jumper with a navicular bursa issue are both living and performing much more comfortably since moving into Whillans Equine.

She was also right that it would help her business' bottom line. ComfortStall requires only enough bedding to absorb urine. Its sealed-to-the-stall wall top layer prevents urine seepage that creates unhealthy barn air and requires regular, heavy-duty cleaning. For those reasons alone, it substantially lowers bedding and labor costs, often paying for itself in less than a year. Less bedding in means less soiled bedding out, making ComfortStall an environmentally friendly choice, too.

Over the extra memorable Memorial Day Weekend, Emma was a first-hand witness to how effective the flooring is in a breeding context.

"I knew I wanted the ability to un-divide two stalls to make one foaling stall, and I'm so glad I thought of that in advance," she reflects. The ComfortStall top cover is normally installed so that it extends a few inches up each wall, to which it is sealed with HDPE anchor strips. A modification to accommodate the removable stall divider was easy to devise, Emma says.

A deeply bedded stall was advised for the mare's comfort throughout her pregnancy. Emma was happy to already have that detail covered with ComfortStall's orthopedic foam. 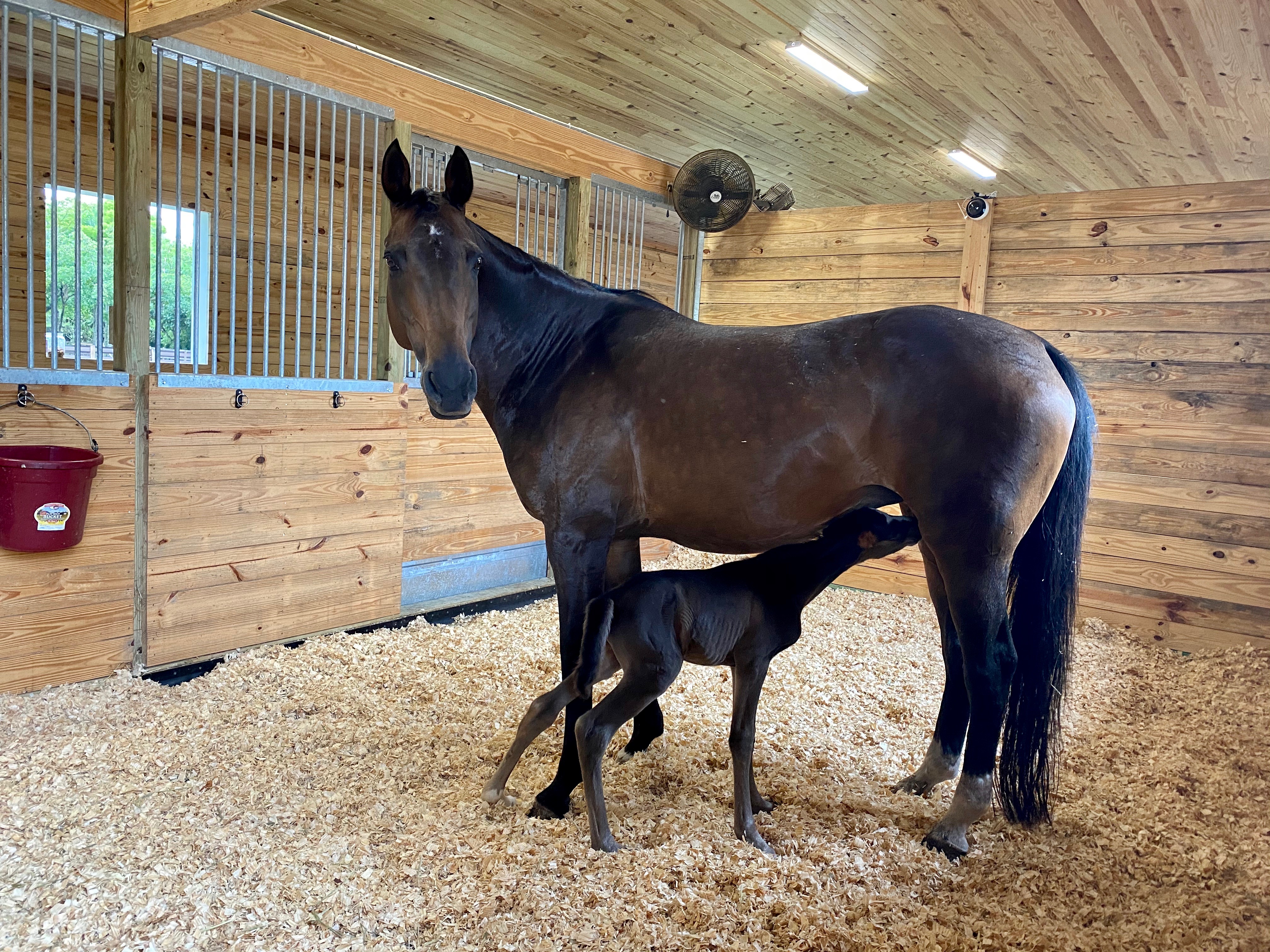 Because Della is a first-timer, Emma removed her shoes. A maiden mare is more likely to accidently step on her foal in the early days. That advice made sense, but Emma worried that carrying an extra 200 pounds on unshod feet would be rough for a show horse that had worn shoes for 12 years. "I pulled her hind shoes first," Emma explains. "On regular barn aisle mats, she was a little ouchy, but in her stall, she was completely fine."

Pregnancy usually brings swollen legs from restricted circulation, but that was another non-issue for Della. The constant, tiny muscle movements that occur while standing on ComfortStall spur blood circulation and proprioception that improve joint health, whether pregnant or not. As a result, Della did not suffer the usual lower leg stocking up.

The flooring was at its finest that Saturday night, when Della had her stretch of anxious behavior shortly before going into labor. "She was in quite a bit of distress and it was nerve wracking there for a while," Emma says. "She had a few nicks from hitting the walls, but I can't imagine what it would have been like if she didn't have this flooring." 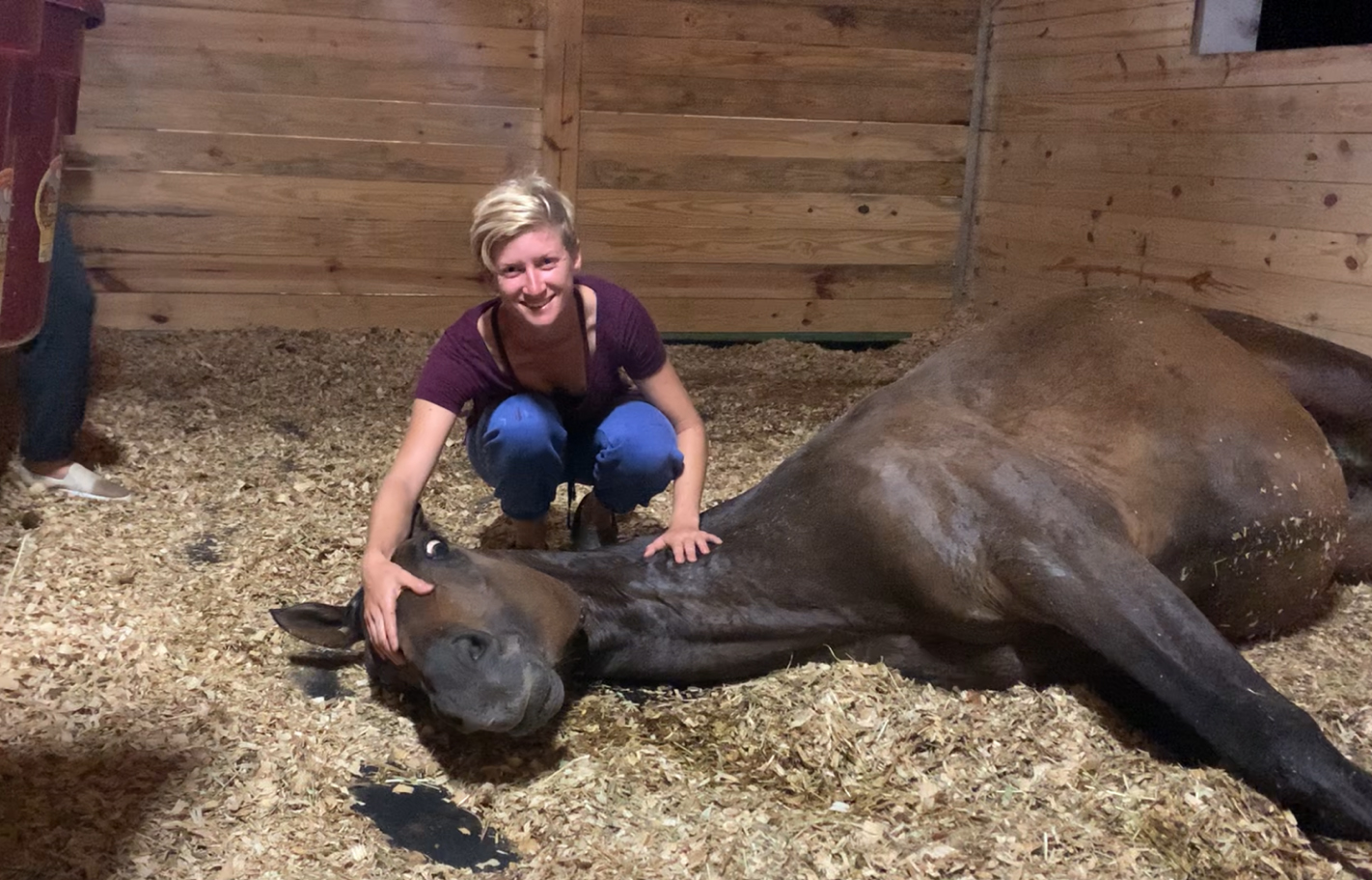 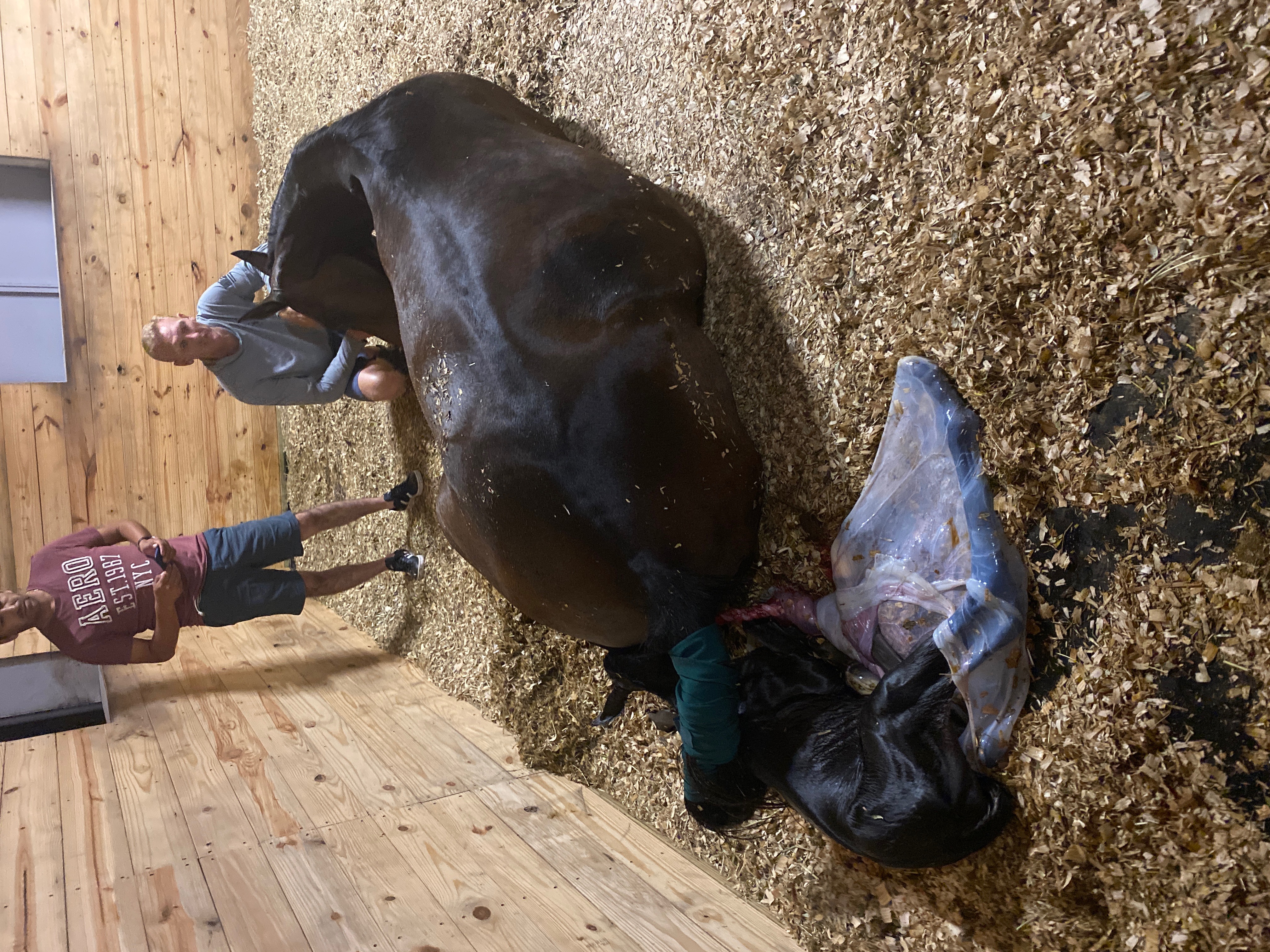 Sure enough, Della did inadvertently step on Uno a few times, an impact lessened by ComfortStall's give. "Both our veterinarians told me how lucky I was to have this flooring."

While straw bedding is often the norm for birthing stalls, Emma is not a fan of its inability to absorb urine. Had the pH reading indicated Della was closer to labor, Emma would have added more big flake shavings to the stall to provide traction when Uno was ready to stand up. After he arrived, a modest quantity of shavings to absorb fluids -- maybe 8 bags for the 12' by 24' stall -- but nothing close to what would have been needed to provide cushion and comfort for the new mother and her baby on traditional stall mats or flooring.

While flooring is too often an afterthought in the barn planning process, Emma put it first. Uno's safe arrival is the latest and most personal of what have been many validations of that wise investment. 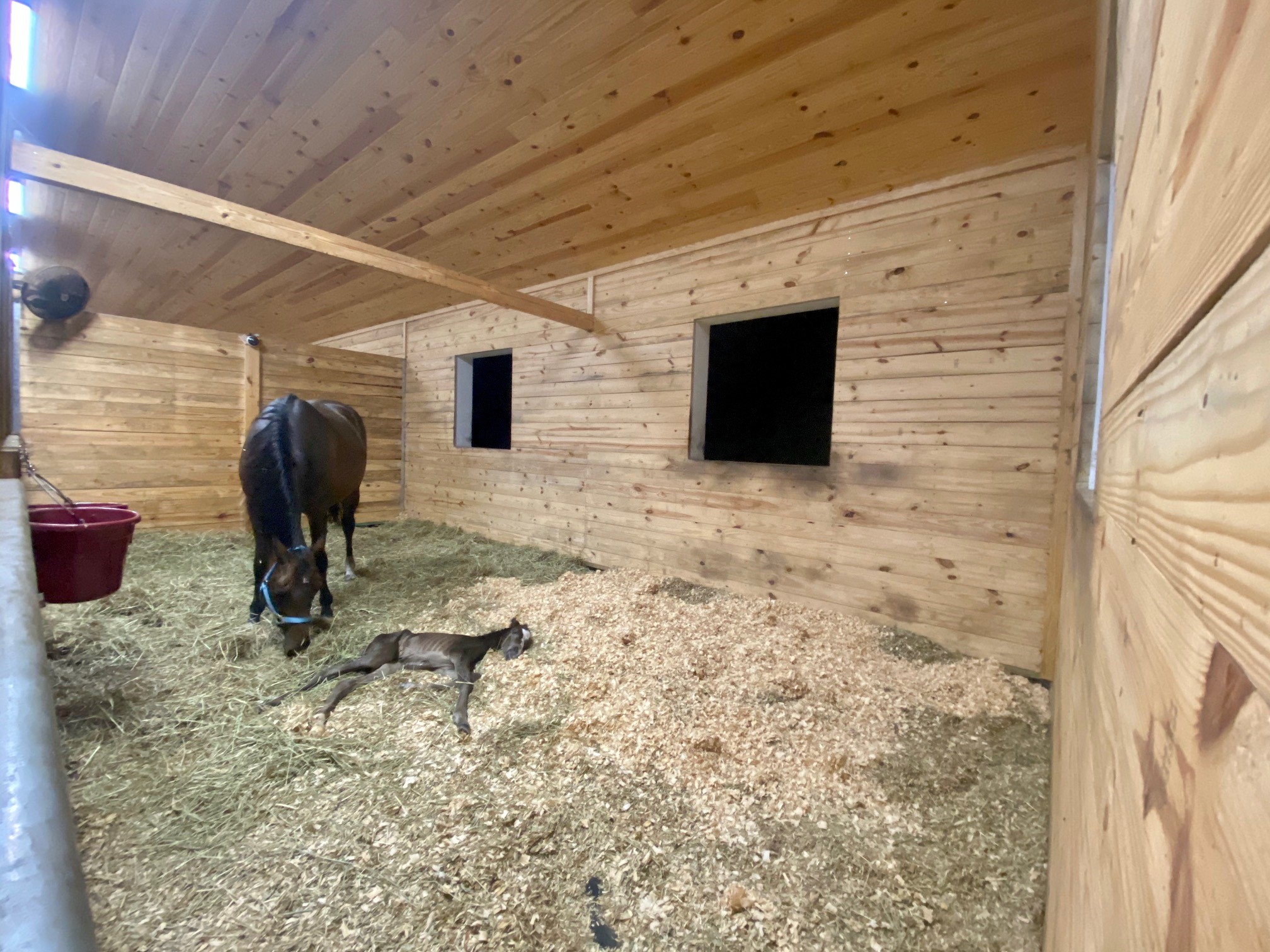 Baby Uno dozes peacefully on ComfortStall after easing into this world.