After a super season of helping The Grooms Award, Ltd., spotlight the good work done daily by the hunter/jumper circuit’s hard-working grooms, Haygain ices the cake by announcing Emilio Garcia as the winner of an HG One High Temperature Hay Steamer. With the Thanksgiving holiday underway, it’s an appropriate time to express appreciation for all grooms, and especially Emilio, who cares for the horses of Ali and Francie Nilforushan of Southern California.

“There are no words for this guy,” says Ali, the Olympic show jumper and show organizer who considers his groom of 22 years part of the family. “He was one of the most energetic people when it came to learning when we first met and he has never wavered from that.” 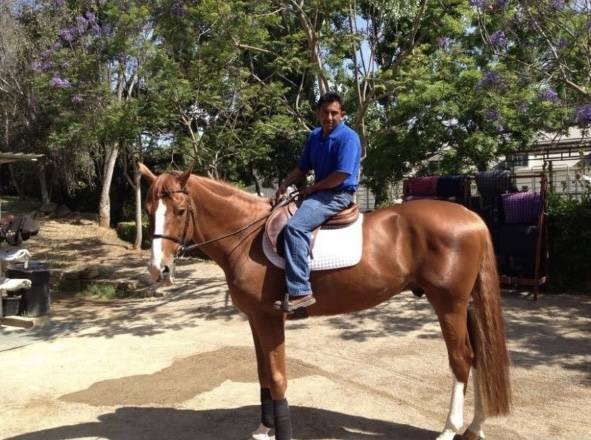 Starting with Week 9 of the Winter Equestrian Festival in March and culminating at the Las Vegas National Horse Show Nov. 21, the non-profit Grooms Award, Ltd, celebrated behind-the-scenes horse caregivers. At each of several major competitions across the country, grooms of horses in the biggest Grand Prix jumping class and several Hunter Derby events were presented with tote bags stuffed with sponsor-supplied goodies and gift cards. Those caring for the superstar equines that won each show’s marquee Grand Prix or Derby received an even bigger goodie bag.

The Haygain HG One High Temperature Steamer is an end-of-year grand prize for which entries flowed in all year. Many entrants were already familiar with the benefits of Haygain Hay Steaming and the equipment’s ease of use, at home and at competitions. Several work for programs that already had one or more Haygain Hay Steamer.

Emilio had experience with Steamed Hay from the program of the Nilforushans’ close friend and fellow show jumper Karl Cook. The general benefits of Steamed Hay are intensified for horses working and competing in California’s arid climate, where dryness and dust are realities even in the best kept barns and competition venues.

Haygain’s patented hay steaming process reduces the respirable irritants and allergens in hay by up to 99% percent. It’s a big help in maintaining peak respiratory health and minimizing allergy risks. Haygain Steamed Hay also has up to three times the moisture content of dry forage and horses like its taste and texture. Owners and riders like the fact that Haygain assures hygienic hay of a consistent texture even when their hay sources change from venue to venue while traveling.

Haygain’s High Temperature Hay Steamers, Forager Slow Feeder and ComfortStall Flooring make equine caregivers’ jobs easier. Even with such horse care advantages, it’s a profession that requires utmost dedication and devotion, from the wee morning hours to late nights in the barn. “Emilio is at work never later than 5:30 a.m., whether we are showing or not,” says Ali.

Emilio was happily surprised to find himself the winner of the giveaway. He doesn’t consider himself “lucky” in the way of winning unexpected things like a Hay Steamer, but instead lucky in things that matter most. “I am so lucky to have a life in which I am healthy, and I tell God thank you for that every day. If somebody wants to give me something on top of that, that’s great!”

About the Grooms Award

The Grooms Award was established in honor of Moira Caffarey (who unexpectedly passed away in 1997) and, later, George Hennessey, a transporter for the USET. Friends of Moira donated a trophy for the first ever Grooms Award at the Pennsylvania National Horse Show in Harrisburg, where individuals and companies donated prizes to be given to the winning groom. As donations increased each year, it was decided that each of the Grand Prix grooms deserved a “thank you” for their efforts and professionalism.

The Grooms Award Ltd. is a not-for-profit 501C3 charitable organization, recognizing professional grooms at select major horse shows throughout the year. The Grooms Award, Ltd, welcomes donations and sponsorships: those interested should contact Marty Bauman of Classic Communications, at 508 698 6810, or via email at marty@classic-communications.com.