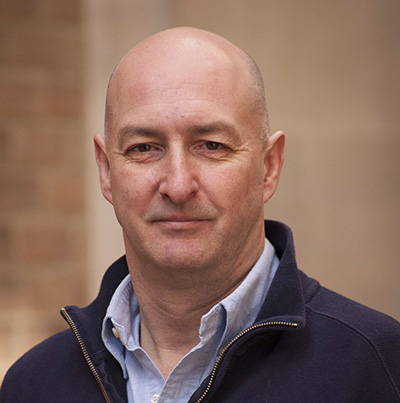 David Marlin
David holds the academic position of Professor in Physiology at Oklahoma State University. He is the author of over 200 scientific papers and book chapters. David’s other affiliations and positions include past Chair of the International Conference on Equine Exercise Physiology (ICEEP) and editor of Comparative Exercise Physiology.

The majority of horse owners now know the fact that if we scope any sample of normal “healthy” horses, its likely we will find some degree of airway inflammation present in 7 or 8 out of 10. This raises the important questions, if its so common, does that mean it's normal?

Perhaps from the outset it would be good to make some definitions or explanations of these terms that are thrown around all the time, particularly airway inflammation and normal versus common. 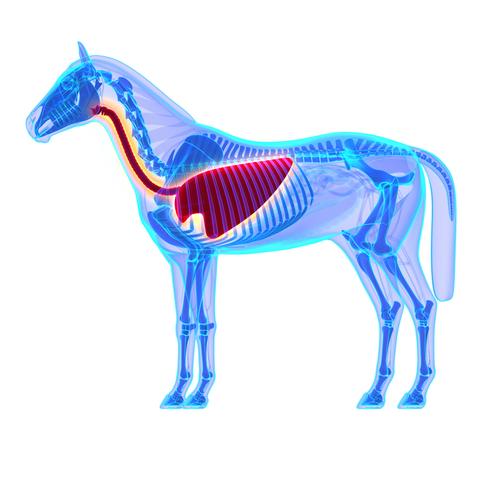 Depending on where in the body the “insult” is, different cells of the immune system will be involved, including predominantly neutrophils, monocytes, eosinophils, lymphocytes, basophils, platelets, mast cells and macrophages. If we start with inflammation in general, inflammation is a response of living tissues to harmful stimuli such as heat, cold, airborne pollutants (e.g. ozone, PM10 from car exhausts, soot, smoke), pollens, moulds (fungi), dust or forage mites, particles (dust, fibreglass, asbestos, cement dust, wood dust, animal dander), gases (e.g. hydrogen peroxide, sulphuric acid) and liquids. In addition, infection with bacteria or viruses or protozoa or mycoplasma also leads to an inflammatory response.

An inflammatory response is generated by the cells of the immune system usually as a result of either contact with the skin, ingestion or inhalation. When a horse or person reacts to something that they have become sensitised to this is termed an allergic reaction. An allergic reaction is an over-reaction to something. So for example, for a person with a peanut allergy, their immune system reacts a 100 or 1000 time more vigorously to some of the different types of proteins present in the peanut. So typically we have five types of inflammatory response – irritant (e.g. ozone, gases, cold), allergic (e.g. to specific feedstuffs, pollens, moulds), infectious (e.g. associated with viral or bacterial infection), inflammatory response due to physical injury (e.g. the response of a twisted ankle is inflammatory) and finally an inflammatory response associated with many non-infectious disease processes (e.g. inflammation of the heart muscle in cardiac disease, inflammation of the liver in liver disease).

The key features of inflammation are:

The origin of the term inflammation relates to the Latin inflammare, which means to “set on fire” and reflects the heat and redness components of inflammation. Inflammatory responses can occur very quickly, sometimes within seconds and may last for years.

Let’s consider a six year old horse with no obvious respiratory disease and put into a dusty stable for the first time. This horse could suffer an acute (rapid and short) inflammatory response. The airways may within minutes constrict a little, there may be some increase in numbers of neutrophils and eosinophils in the airways (these come from the lungs blood supply and within the lung tissue itself and travel into the airways).

The cells that produce mucus which are in the walls of the airways may produce a little more mucus. But we are unlikely to see anything and if we go back a few days later we may still not be aware of any changes. But, let’s say that horse is in that stable 12h a day for the next 2 years. If we were then to go back and ‘scope this horse we might well see some changes. 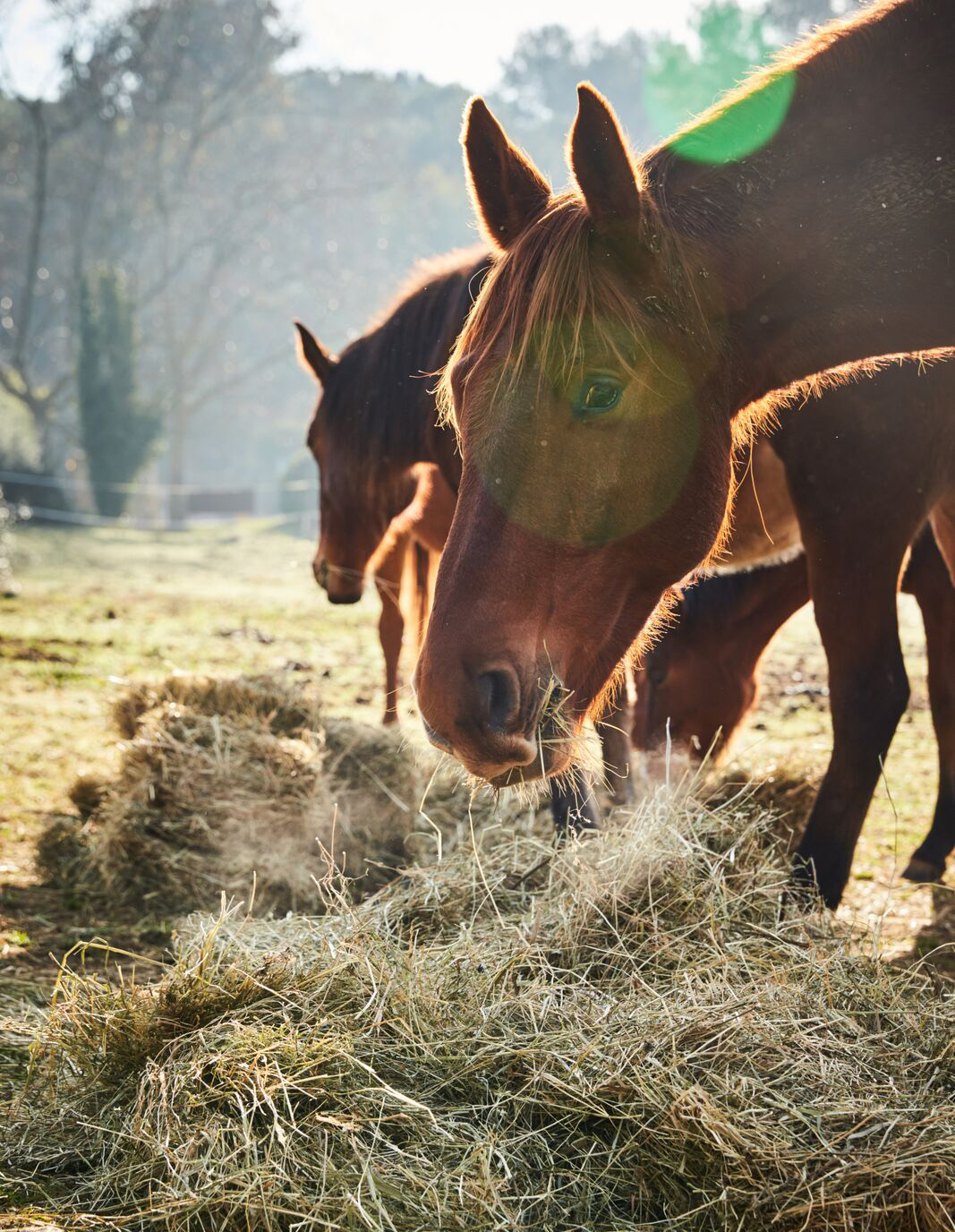 Many owners when asked about their horses’ respiratory health will say that their horse “never coughs”. However, if we ask a slightly different question, such as “does your horse ever cough when you first start riding”, many owners will answer “yes”.

Horses with even very mild respiratory symptoms such as occasional cough or occasional slight nasal discharge can show moderate to severe respiratory disease when scoped. 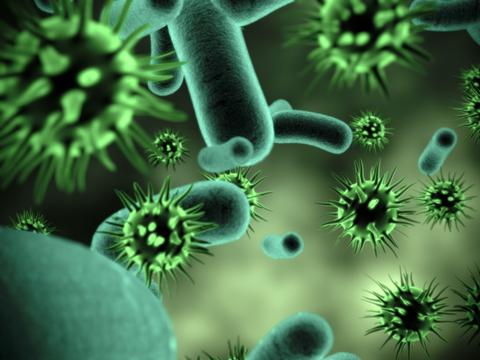 This is because chronic (long term) inflammation can have several outcomes. The first is that the airway walls become thicker as a result of repeated inflammation and effectively the laying down of scar tissue in the walls.

At the same time the muscles around the airways, which constrict when necessary to protect the lungs from irritants, become thicker and more reactive. The cells that produce mucus may also have increased how much mucus they produce which leads to smaller airways becoming blocked.

Now the horse has equine asthma (previously referred to as RAO or equine COPD). This is a chronic disease which the horse is not going to recover from. It can be managed with improved air quality and drugs as required, but this horses’ lungs will not return to being “normal”. Equine asthma is a disease for life. Typically the onset is a round 5-6 years of age and it is more common as horses become older, similar to late onset asthma in people. The amazing thing is that until such horses often have an exacerbation – a clinical episode where no one can be in doubt the horse has respiratory disease (e.g. cough, nasal discharge, reduced performance, etc), the owner may not be aware of what has been going on in the lungs.

Although the early stages of long-term respiratory conditions such as equine asthma are “silent”, i.e. we would not know its there unless we carried out endoscopy, the one signal that for decades has been accepted as “normal” and which should not be ignored is coughing. Many owners when asked about their horses’ respiratory health will say that their horse “never coughs”. However, if we ask a slightly different question, such as “does your horse ever cough when you first start riding”, many owners will answer “yes”, but clarify that with a statement such as “ah yes, he does cough when warming up, but that’s normal and just clearing his throat”.

The horse is clearing something, but it’s not his throat, its mucus clearing from the airways as a result of the increase in air movement and its certainly not normal and should never be ignored. Horses with even very mild respiratory symptoms such as occasional cough or occasional slight nasal discharge can show moderate to severe respiratory disease when scoped. 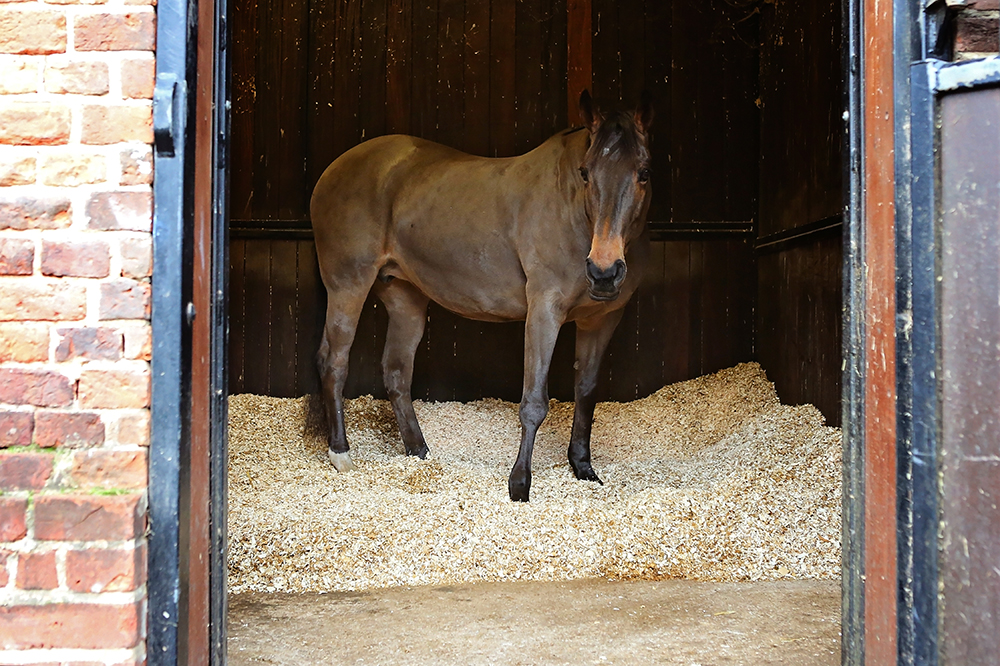 Several years ago Dr Colin Roberts, an equine respiratory medicine specialist, and myself ‘scoped eight British Endurance Team horses before a major competition. All horses lived out 24/7. None was showing any symptoms of respiratory disease. Seven out of the eight required treatment. And we have seen the same in many elite horses and in many livery yards. Different studies of “normal” horses with no clinical (i.e. external visible) signs of respiratory disease have consistently found that 70-80% of stabled horses will have respiratory disease. 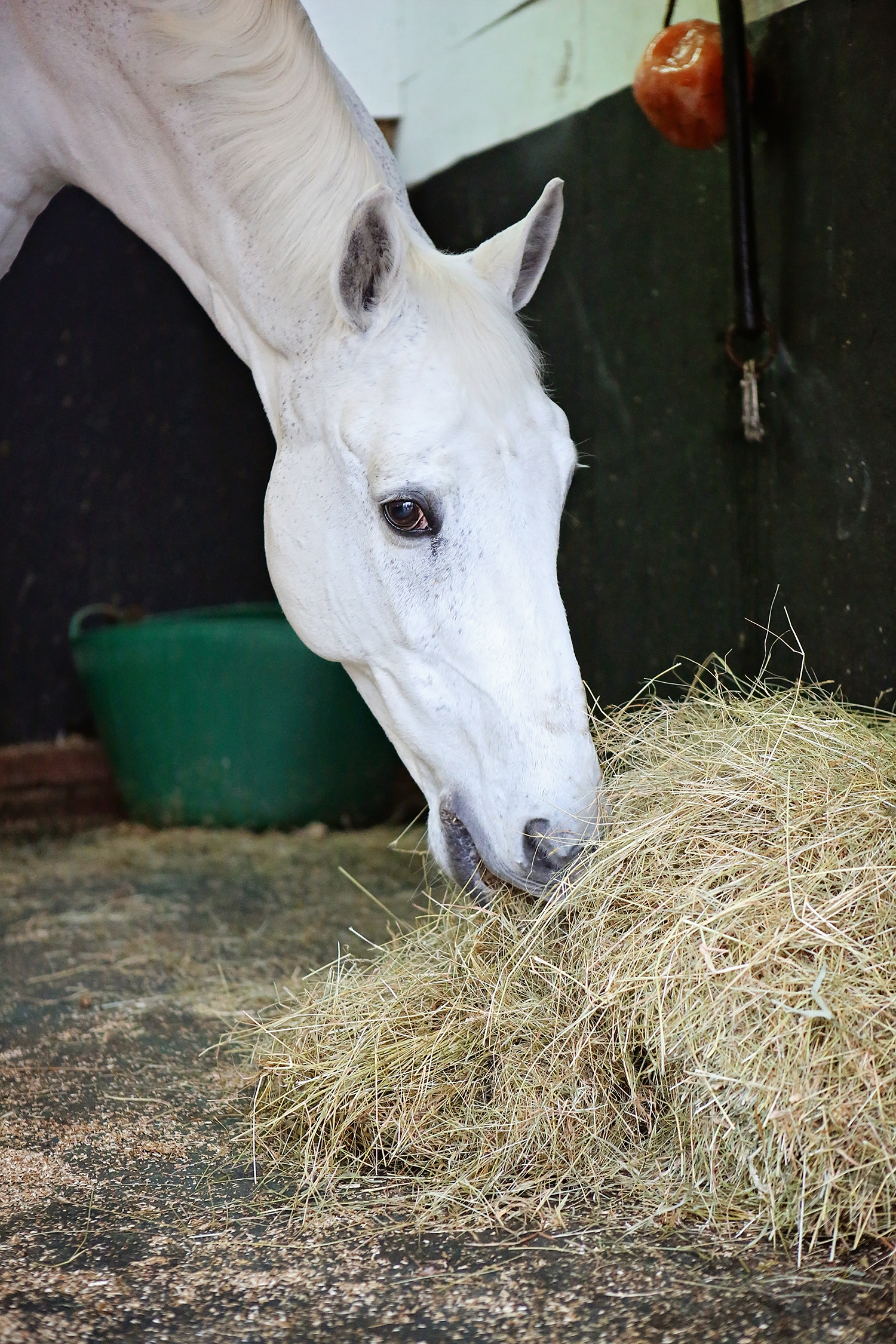 So, back to the original question, if it’s so common, is it normal and does it matter?

To understand if its normal we need to look at what happens in wild horse populations or extensively managed horse populations. What we see here is a much lower level of respiratory disease. One reason could be that these populations live in areas with better air quality, but this is likely only part of the explanation. A second reason could be related to the hygiene hypothesis. In parts of the world where people are regularly exposed to parasites and have less antibiotic treatment there are much lower levels of allergic type diseases. I am 100% not suggesting anyone should not worm their horse or refuse antibiotic treatment for their horse as these are two of the factors which help explain why life expectancy of domesticated horses is probably twice that of true wild horses.

The final part of the jigsaw when it comes to equine asthma is likely to be purely and simply allergen exposure. The more allergens and the longer the time a horse is exposed to allergens such as pollens, moulds, bacteria, mites, etc, the more likely it is to suffer from airway inflammation which if persistent is likely to increase the risk of equine asthma.

Whilst some exposure to these allergens occurs when the horse is outside, by far the majority of the exposure comes in the stable from hay and or bedding, particularly straw and lower quality shavings. In addition, when stabled the horses normal protective mechanism for keeping its airways clear is inactive! In simple terms, when a horse is out and grazing its head is down which helps mucus move up the airways and reduces accumulation.

Accumulation of mucus is something every bacteria in the horses airways is waiting for. Every horse, even the most healthy horse, has some bacteria present in its airways waiting for an opportunity. Tying a horses head up for as little as 6 hours can lead to the number of bacteria in the airways increasing several 100 and even up to 1000 times.  So its clear that reducing exposure to potential irritants and allergens can reduce the risk of airway inflammation and in the long term, equine asthma.

But we come back to the question, does it matter?

Firstly, as in people, chronic respiratory disease in horses impacts severely on their quality of life.

Thirdly, there is the lost riding time for horses severely affected. Its no fun even for pleasure riding to be out on a coughing horse or a horse that can no longer manage to exercise easily and comfortably.

Finally, the effect of even mild respiratory disease on performance has been well documented in many different studies from race horses to eventers, to dressage horses, showjumpers and even gymkhana ponies. If respiratory disease is present, even without any obvious clinical signs (no cough, no nasal discharge), then this will be negatively affecting performance. 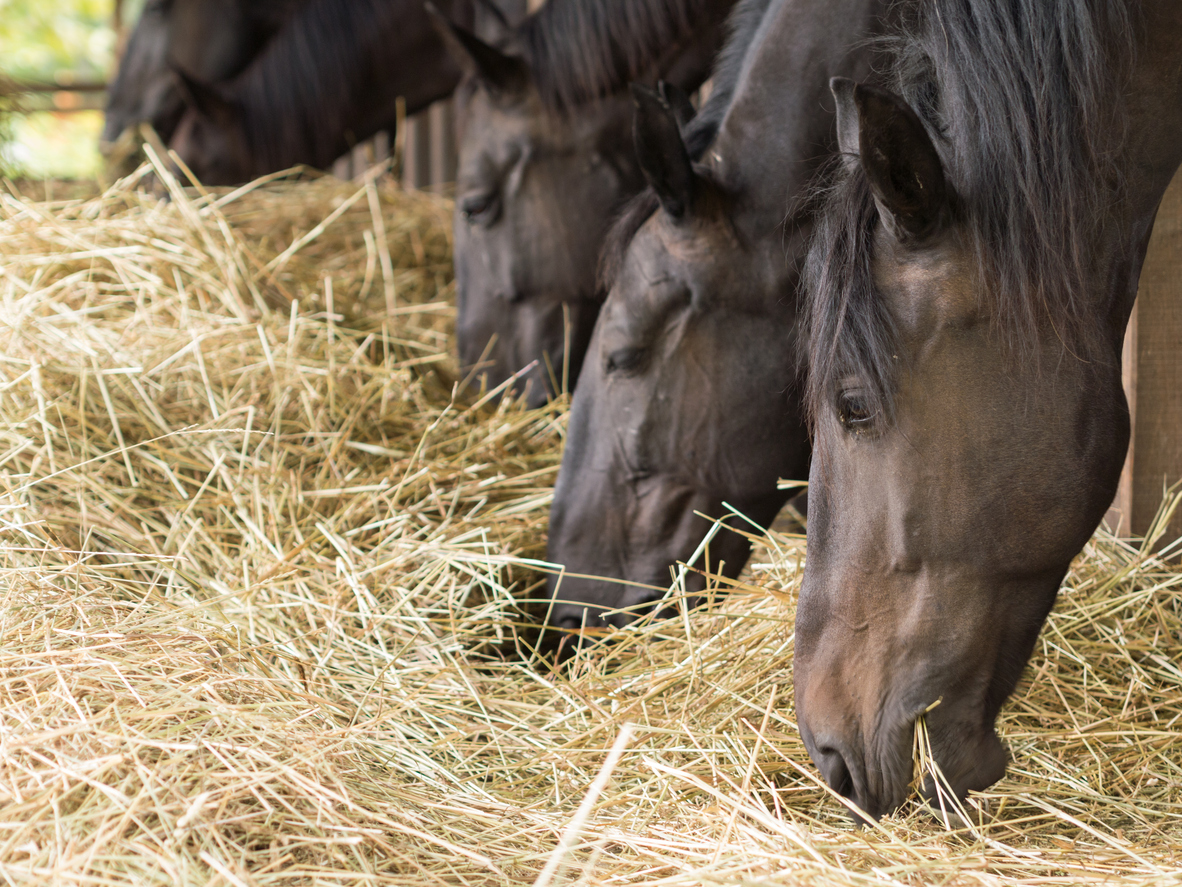 To summarise, airway inflammation in horses is extremely common. It's not normal and even the slightest indication such as the occasional cough or a mild nasal discharge are an indication to speak to your vet and think about ‘scoping. The risk of a horse or pony developing chronic airway inflammation or in the longer term, equine asthma, is largely down to air quality when stabled. Even in foals as young as 3 months old its possible to see the difference in the airways between those on poor versus good management. Prevention in this case is always better than cure, which once horses have equine asthma, is no longer an option.

See what Dr Marlin says about how you can reduce the risk of respiratory disease in your horse. The season of cleaning begins March 20th with longer days...