The horses of Iron Rock Dressage are a little spoiled.

"The care of the horses is what really attracted me to the program when I came out here for the interview," says Eleni Econopouly, Iron Rock's rider and barn manager. "That's what I fell in love with. Wynne's philosophy is hard to find. She's someone who really cares about the horses and is willing and able to put in all the time, energy and costs required. Even the people who would like to do it this way often wind up having to take shortcuts." 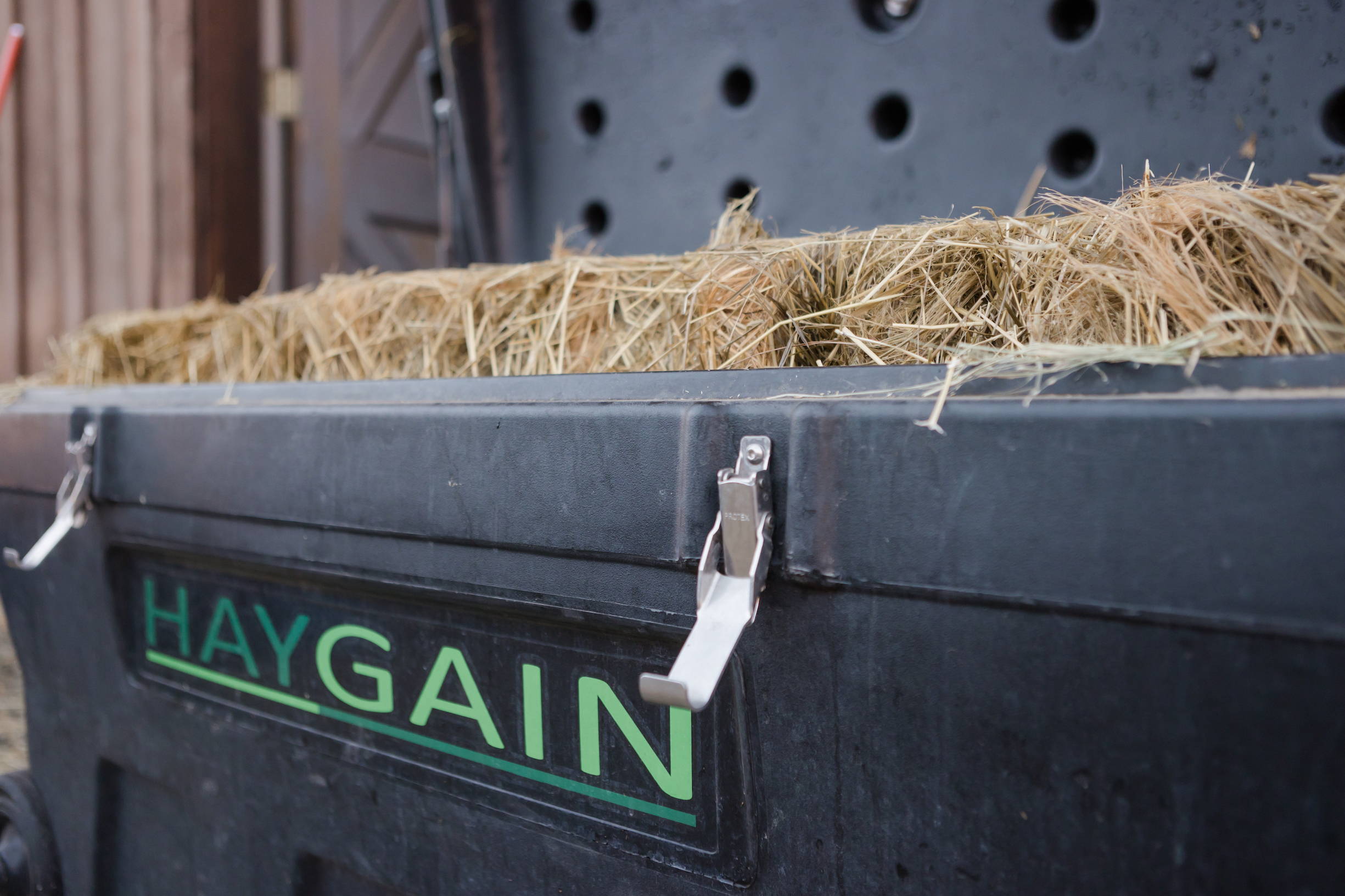 Wynne and Eleni found themselves almost immediately in synch when Eleni moved from the East Coast for the position three years ago. "It's nice because we have really happy healthy horses that are at the top of their game," Eleni reflects.

A lifelong horse person, Wynne grew up on her family's Arabian breeding and training facility. "It's always been my philosophy that training and riding are only about 25% of what's required to have healthy, successful horses. Of course, you have to do that really well!" The horse's management and experience the rest of their day is equally deserving of focus and consideration, she asserts.

No horse carried the Iron Rock Dressage flag more dramatically than the late Jasper, a rescued Kiger Mustang that was completely feral on arrival. "You couldn't touch him," Wynne recalls. "He'd get loose and I'd have to say, 'Oh, well he'll come back...'" He not only came back, he went from feral to being a competitive Third Level dressage contender and fan favorite. Jasper even helped the Make-A-Wish Foundation fulfill the request of a seriously ill child to ride a horse.

Heartbreakingly, Jasper was lost to colic in May of 2020. The Iron Rock team threw all their resources into life-saving surgeries and care, but it was not to be. Instead, the long and amazing journey of his short life stands as testament to what's possible when a horse's welfare and well-being are a training program's guiding priority.

How Those Priorities Play Out

Haygain Steamed Hay is a recent addition to Iron Rock's meticulous approach. The catalyst was repeated cases of newly-imported horses developing allergies and respiratory issues, a common scenario following significant changes in environment. "They didn't have a cough when we first imported them, but after a while on dry hay, they developed them," Eleni explains. "Some of them started to get a little hivey. We were soaking hay, but then you lose all the nutrients and we had to increase supplements to cover that."

Eleni had worked at a New York barn that used a Haygain Hay Steamer for horses with diagnosed respiratory issues, so it was top of mind as something worth trying. The largest model, an HG 2000, arrived about one year ago and now all Iron Rock's competition-targeted horses get it. The imports are put on it immediately to prevent problems, a smart move because sensitivities to one irritant or allergen can spiral into increased sensitivities to others.

The competition horses stay on Steamed Hay as part of their carefully managed nutrition routine. Eleni notes that these already-healthy horses seemed to bloom to new levels after getting Steamed Hay regularly. "They look a little fuller, in their topline and in their coats, and the only thing we changed was adding Haygain." Haygain High Temperature Steaming reduces up to 99% of the respirable irritants found even in hay of good nutrient content. And it does so without degrading nutrients. It increases moisture content in hay up to three times and, like Iron Rock's charges, horses like the taste and texture. 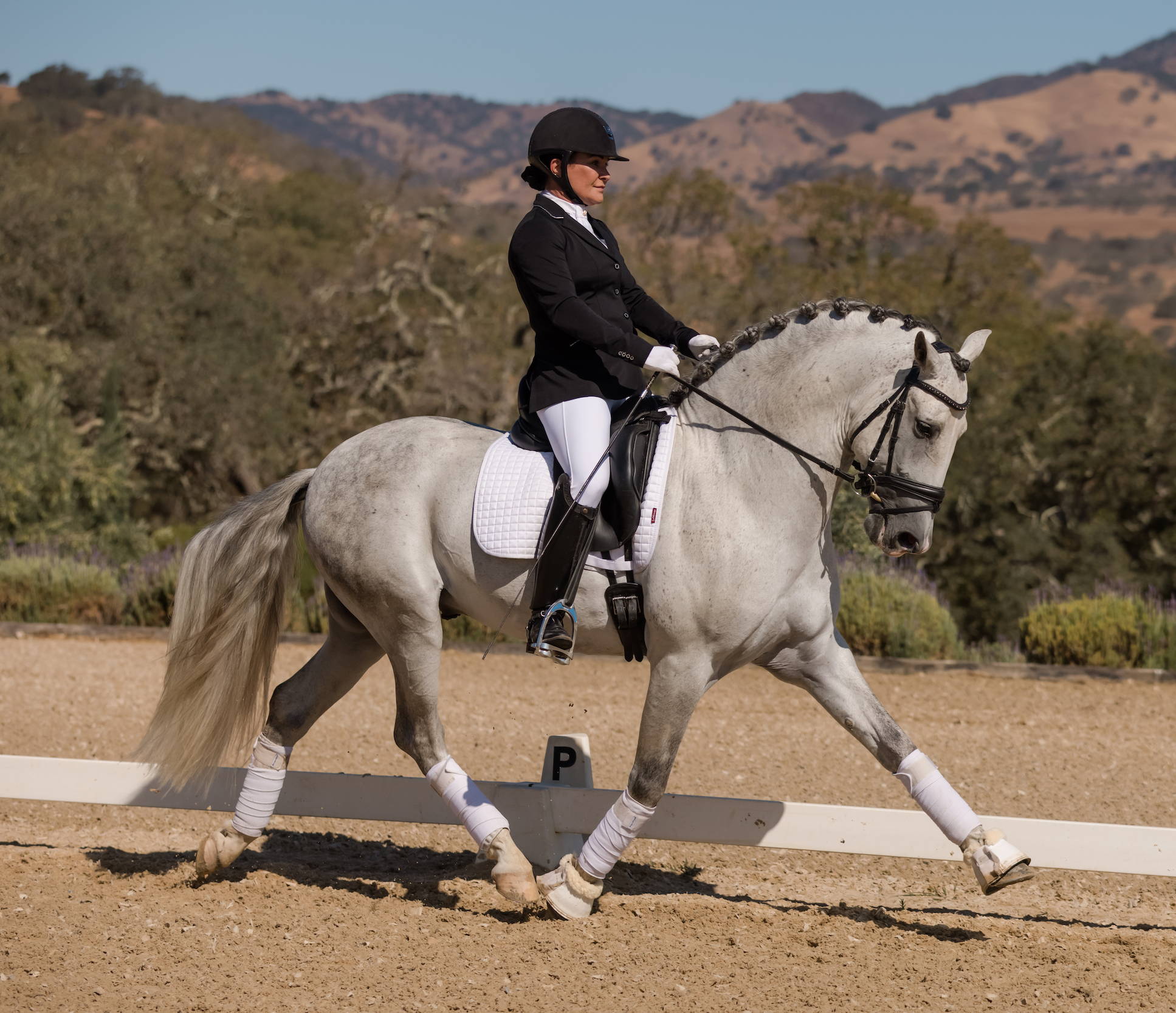 Frequent fires and long-lingering airborne particulate matter are potential downsides to horse keeping in the otherwise ideal Northern California climate. Wynne and Eleni believe Haygain Steamed Hay probably helped their horses get through last year's terrible fire season. Iron Rock was not directly threatened, but Air Quality Index numbers were unhealthy throughout the region for long stretches. "Knock wood, our horses did really well even though I heard of other people having problems," Eleni shares. Saline solution administered with a Flexineb Portable Nebulizer also supported respiratory health in those tough times.

Iron Rock's horses receive automatically scheduled flakes of Steamed Hay, along with beds of fodder, delivered into their stall throughout the day. The Easy Feeder by High Noon Products in an automatic feeding system with six trays. It drops a flake of hay, or tray of fodder, into the horse’s stall per programmed instructions -- every four hours at Iron Rock.

Fodder is hydroponically grown from non-GMO barley, sprouted over six days into a pallet of green shoots. Each approximately 20-pound bed of the energy-dense feed boosts lysine, vitamin E and Omega 3 fatty acids in the horse's diet, plus more water.

Having regular access to forage is good for several reasons. It helps maintain natural metabolism and reduces the stress of not knowing when the next meal will arrive. Chewing more often through the day approximates natural grazing behavior and produces saliva that helps protect the lining of the horse's stomach from naturally occurring acids.

Daily fitness routines are as carefully plotted as nutrition. A typical day for most horses starts with 30 minutes wearing a Sport Innovations blanket that combines massage and PEMF (Pulsed Electromagnetic Field) therapy, 10 of those minutes usually in the Theraplate stall. Time loosening up the body walking in the Kraft Horse Walker is part of most horses' morning and afternoon. 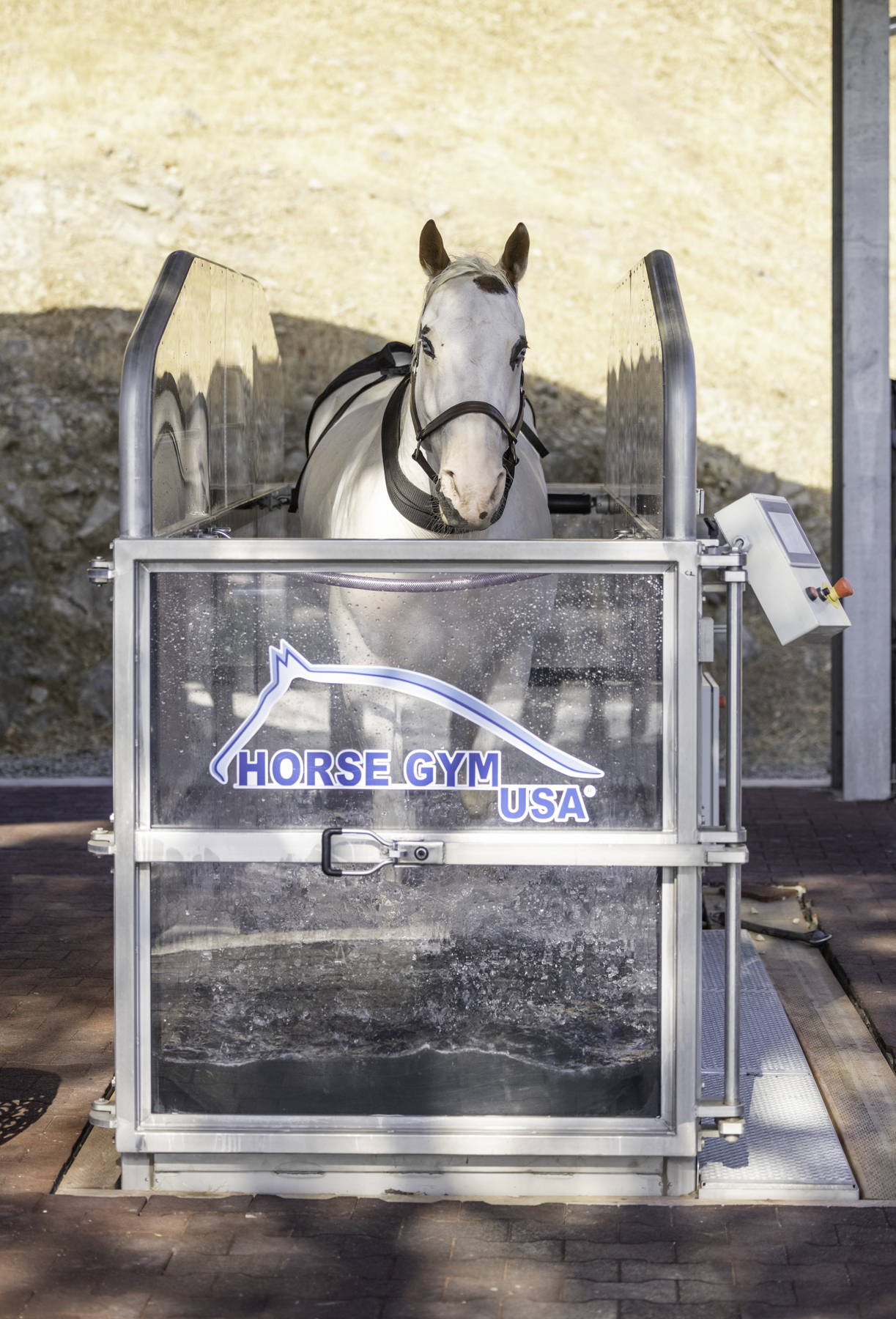 Most horses have regular sessions in the Ice Bath and/or Aqua Treadmill, both made by Horse Gym USA. Each horse has a custom work-out for the Aqua Treadmill, designed by Ted Sparks. Watching the horse work and studying its musculature via Facetime sessions, the Florida-based professional is a personal Aqua Treadmill coach for horses addressing broad goals: from fitness for the highest levels of their sport to injury recovery.

"He might notice that a horse is a little stiff in one stifle, not elastic enough in the back, or just generally needs to be more fit," Eleni says. "He customizes the work for each horse."

In addition to walking unencumbered in the ceiling-mounted Kraft Horse Walker, horses have 50 acres of rolling hills to ride through. "I've always made sure I was somewhere that we could go out on trail," explains Wynne. "Horses really do seem to appreciate it. The hills are great for fitness and I feel a horse is not really well-rounded if he is only trained in the arena." Two large grass turn-outs and smaller paddocks provide additional outdoor time for horses kept in oversize stalls with generous runs and clear views of activity in the barn and well beyond it.

Wynne and Eleni are high level competitors: Wynne at the FEI level for over 25 years and Eleni with aspirations to represent the U.S. in competition. They both hope that some of their current young horses can be developed into suitable mounts for an international pursuit. Those who don't prove a perfect match for that highest level will make excellent partners for the ambitious, talented amateur riders who comprise the biggest market for high quality dressage horses in the U.S.

"I'm grateful to be able to do this," says Wynne, taking a break in a typically 10-hour day at the ranch. She is sitting in the well-groomed barn aisle, looking out on a peaceful view of golden rolling hills and vineyards. A handsome Spanish horse reaches over his stall door to nuzzle her shoulder, and a few of Iron Rock's 11 dogs gather at her feet. "Even the horses that we're still working on and trying to figure out what's going on with them, what I love is helping these guys. Taking an equine athlete and making them better and learning about so many things along the way."