Emotional Start to the Season for Steam Teamer Nicky Galligan

Steam teamers were winners coast to coast this past weekend. In Wellington, Florida, Kent Farrington and Austria 2 won the NetJets $137,000 FEI jumping Grand Prix and Steffen Peters and Suppenkasper won their 16th consecutive FEI dressage victory in a Special presented by Havensafe Farm at the Adequan Global Dressage Festival.

Emotionally, however, they may not compare to Nicky Galligan's win of the $137,000 FEI Grand Prix, presented by Brown Advisory, at the Desert International Horse Park in California. it was the first FEI Grand Prix win for Nicky and Javas Miss Jordan, the now 12-year-old Irish Sporthorse who came to Nicky as a 4-year-old.

Sired by Luidam out of an OBOS Quality mare, Jordan came from breeder Judy Murphy. Nicky wasn’t impressed initially and tried to sell her as an eventer. Then one day while competing in a 1M class, “She just started jumping the top of the standards, jumping like a freak,” Nicky told TheWestEquestrian.com.

He determined that “Jordan was quite special and a horse who I could chase a career with or sell and buy a home and settle down in Ireland.” He chose the latter.

Jordan spent her 5-year-old year in grass pastures at the Galligan family farm in County Meath, Ireland. That's where Nicky learned "to be a horseman rather than a competitor." 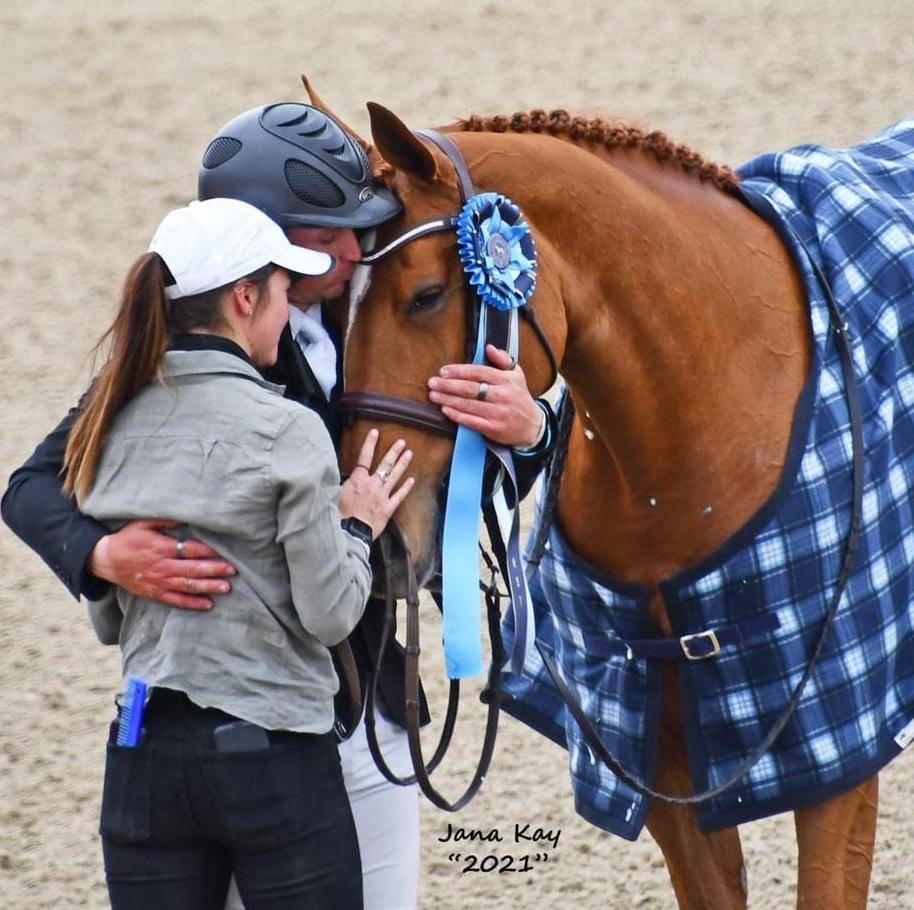 As Jordan enjoyed green fields, Nicky began making his way in the United States. Riding 15-16 horses a day for Hyperion Stud in Virginia, he honed his inherent gifts for developing young horses. By the time Jordan came to the U.S. in late 2018, she was poised for progress.

Jordan began making her mark a year later with good placings in 3* Grands Prix at Tyron, North Carolina, then winning FEI classes at Tryon and Aiken, South Carolina. COVID paused their show progression until last summer when they resumed in top form with the string of top finishes at HITS Saugerties in New York.

In the fall, Nicky and his partner and fellow young up-and-comer Paige Jardine lit out from New York to see what the West Coast had to offer. The season was filled with a Thursday Grand Prix win and top finishes at the Desert International Horse Park.

Sunday's victory tops it all and Nicky gives all credit to his mare. The plan all along was for her to hit her peak this year, and they are off to a great start. "She leaves me dumbfounded every time!" he told the DIHP team after the win.

Old school horsemanship also plays its part in the pair's success. After jumping her first 1.5M track early last year, Nicky felt something was a little off with Jordan. He has exercise-induced asthma himself and recognized in the mare the sensation of being a little out of breath at the end of the course. Occasional rails during her first outings in the States didn't feel the fault of fitness or form, but rather "her having a moment of feeling that there is too little oxygen in her lungs." 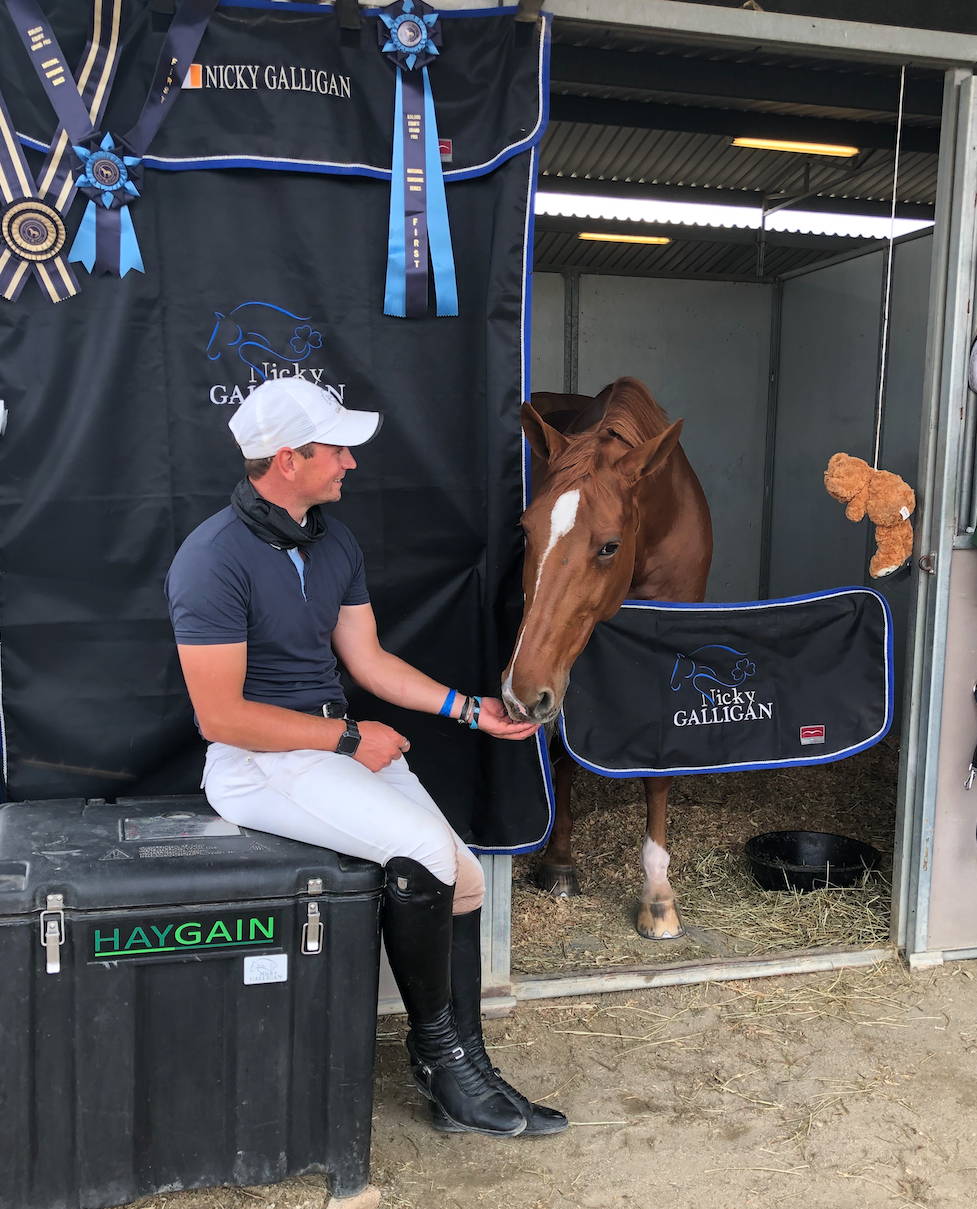 He'd been soaking her hay to reduce dust and realized a more effective approach to maintaining peak respiratory function was needed. Since replacing soaked hay with Haygain steamed hay, Jordan's breathing throughout the course has been significantly easier, Nicky reports. Recalling his own sensations with exercise-induced asthma, he feels that her mind is clearer and more focused thanks to getting sufficient oxygen.

That makes sense given the physiology of equine respiratory function. Horses' bodies are 60% muscle and muscles need oxygen to function. The lining of the airways and lungs is easily inflamed by microscopic irritants found even in hay of good nutritional quality: dust, mold, bacteria and other allergens. The inflammation can constrict the airways and impede the transfer of oxygen from the lungs to the bloodstream, where it's carried to muscles. Any slowdown of that process affects performance.

Another respiratory reality is that horses inhale and exhale on each canter stride. If they have to breath more often to get sufficient oxygen, leaving out a stride to save time in a jump-off becomes an even riskier option.

Nicky admits to pampering his "princess" Jordan. However, protecting respiratory health with Haygain steamed hay is not a luxury reserved for equine princesses. High temperature hay steaming eliminates up to 99% of the dust, mold, bacteria and other allergens found even in hay of good nutritional quality. It's a necessity for many and a proactive step taken by horsemen like Nicky who put their horse's well-being above all.