Horses living indoors can be exposed to 50% more respirable particles than those living outdoors. Understanding this reality is the first step toward reducing respiratory risks that our horses are exposed to when stabled.

All stabled horses inhale allergens and will be affected even if they do not show clinical signs. It is widely acknowledged that airborne respirable dust of less than 5 mm in size found in the stable environment has a major negative impact on respiratory health in horses. These particles can cause the debilitating conditions found on the Equine Asthma Spectrum.

Ample research demonstrates that over 80% of active horses have some degree of respiratory challenges – like the Mild and Moderate Inflammatory Airway Disease found on the Equine Asthma Spectrum. One example is current research identifying 1 in 6 horses in the UK as suffering from Severe Equine Asthma, and 4 out of 5 (2yr old racehorses) suffering from Inflammatory Airway Disease.

In fact, respiratory disorders are the second most common performance limiting factor. Poor performance and exercise intolerance have been found to be more frequent in horses with fungal particles found in their airway than in horses without it (Dauvillier et al., 2018). Horses with respiratory disorders also had 4x the risk of lameness due to fatigue, tiredness, and less oxygen to the muscles (Murry et al., 2009).

It is important we reduce exposure to allergens in the stable environment to aid respiratory health. We know that the majority of dust is brought into the stable in the form of bedding and hay.

Certain types of bedding and forage represent significant risk factors for equine asthma, with dry hay and straw not recommended. Straw can be a source of fungal particles closely linked to respiratory problems. The negative effects of this combination are magnified In American Barn set-ups with shared airspace. The best management regimen is to feed steamed hay and bed on dust-free shavings where possible (Auger and Moore- Colyer, 2017).

Daytime total and respirable particulate concentrations have been found to be nearly double the concentrations measured overnight, independent of management system, further reinforcing the impact of activity within the barn on particulate exposure. Where possible, muck out and sweep the barn when the horses are out in the field or being exercised (Ivester et al., 2014).

A horse’s urine contains urea, which is a by-product of the digestion and metabolism of protein in the horse’s diet. Urea is broken down by bacteria and off gases as ammonia.

Ammonia levels will vary depending on the stable set-up, ventilation, amount of urine produced by the horse, how often the stable Is mucked out/cleaned/disinfected and the flooring itself.

Highest levels are found 12” from floor level (80- 450ppm). Exposure levels of 220ppm for 10-30 minutes correlate to irritation of the respiratory tract, eyes and nose. This occurs at lower levels when horses are exposed for longer periods of time.

Ammonia production is often particularly high on deep bedding systems, in which wet matter is allowed to seep through layers of bedding to the subfloor. Without sealed flooring and/or heat or chemically treated bedding material, bacteria can accumulate and proliferate. The rule of thumb is that, if you can smell ammonia, it is already at a level that will irritate airways; yours and your horse’s.

A non-porous floor such as Comfortstall by Haygain enables you to muck out the wet bedding, remove all the urine and starve subterranean populations of bacteria that have been thriving on a steady supply of urea. As a sealed, one-piece flooring system, ComfortStall allows you to contain the urine and gives the bedding more chances to absorb it. It also allows for easy and efficient cleaning with disinfectant.

A 2001 study by the Equine Pulmonary Laboratory at Michigan State University’s School of Veterinary Medicine found that young horses stabled during training suffered respiratory distress when compared to pastured horses of the same age. While dust and mould in feed and bedding played a part in pulmonary problems, exposure to ammonia also negatively impacts their respiratory systems (Hayes, 2005). 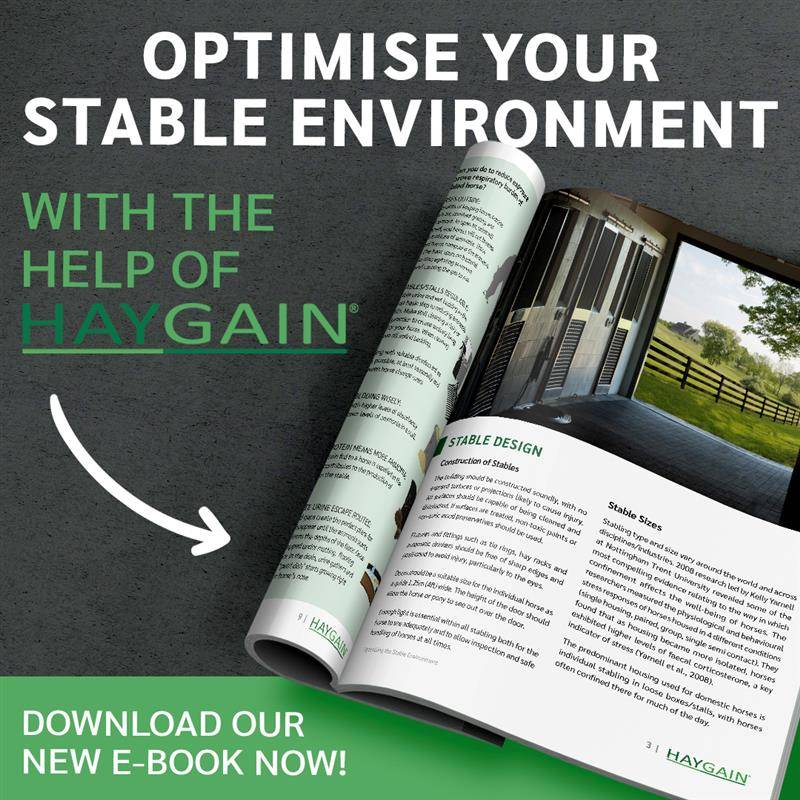 It's not just horses who should be protected from high ammonia levels. In humans, ammonia exposure causes narrowing of the throat and bronchi, fluid in the lungs, eye irritation, nausea, vomiting, and dizziness. According to the North Carolina Department of Health and Human Services, extended exposure to ammonia fumes can cause chronic inflammation of bronchi, airway hyperactivity, and chronic irritation of the eye membranes.

For more tips on making the stable environment more natural and healthier for our horses, download Haygain's e-book "Optimizing the Stable Environment."