Haygain Hay Steamers are a common site at equestrian facilities around the world. At camp sites in Missouri? Not so much.

Avid trail rider and horse camper Jane Doskal doesn’t leave home without her Haygain Hay Steamer. Her partner, the Rocky Mountain Horse, Roxie Ann, has equine asthma and Jane considers Steamed Hay critical to keeping the mare breathing easy on their sometimes-rigorous treks in beautiful Midwest locations. She’s amused by the questions that come with that.

“How much beer you got in there?” asked camp site neighbors during a recent visit to the Shawnee National Park in Illinois. Roxie’s hay was mid-steam at the time, so Jane couldn’t immediately produce a visual answer to their raised eyebrows when she explained it wasn’t beer inside, it was steamed hay. 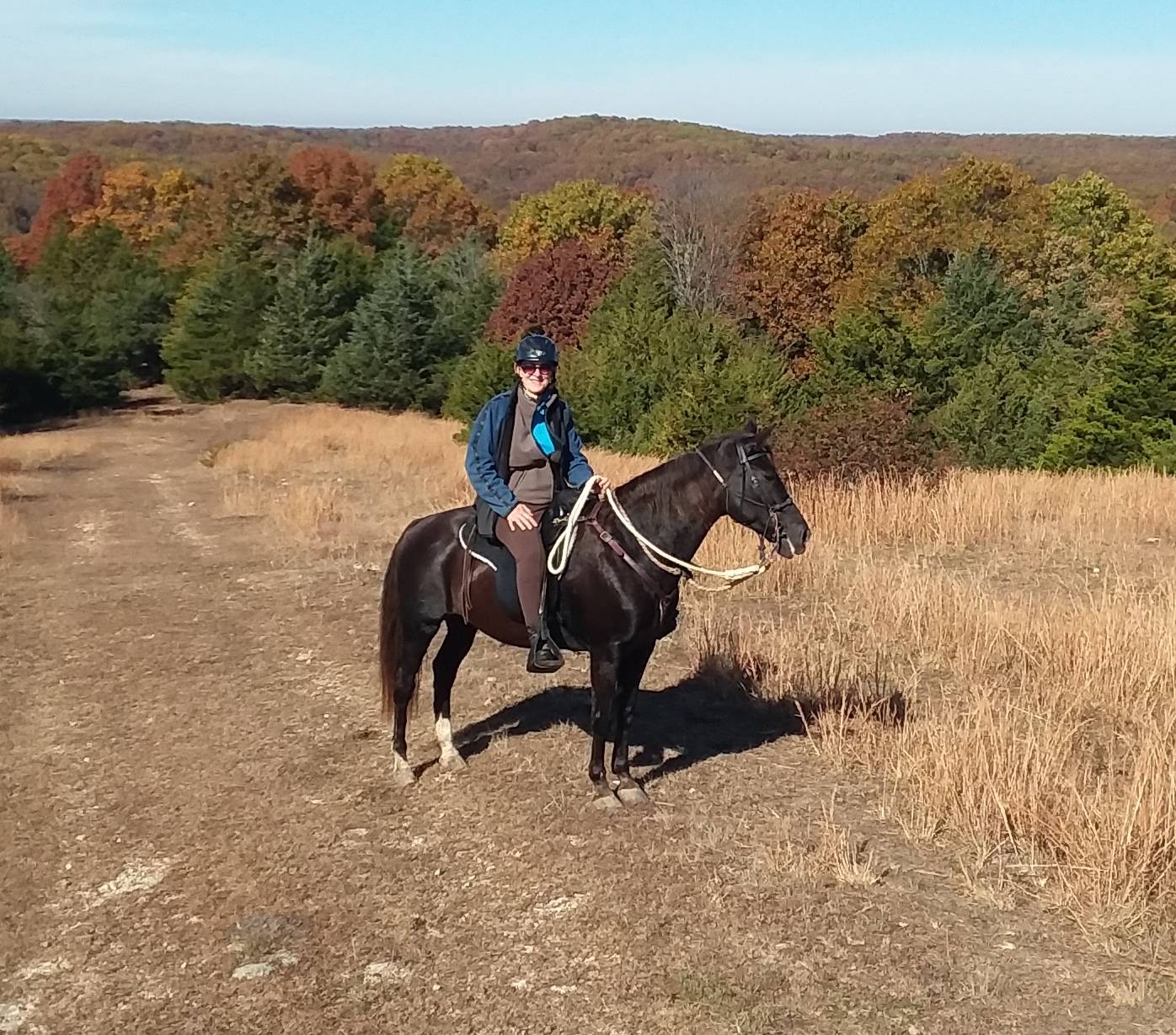 When the steaming cycle finished and Jane lifted the lid to reveal rising, aromatic steam wafting off the hay inside, her answer made a lot more sense to the campers. The appealing scent of fresh steamed hay makes sense as something healthy and good to most people – horsey or not.

Jane and Roxie travel with a living-quarter trailer. She uses the trailer’s 30-amp power supply to run the half-bale HG 600 steamer. She can’t run the air conditioning simultaneously, but otherwise steaming on the road has been easy-peasy, Jane reports.

Jane bought Roxie three years ago, when the mare was 12. There was no evidence or mention of asthma when Jane tried the dappled, chocolate brown horse and she proceeded confidently with the purchase.

Early-stage equine asthma can be very subtle, sometimes not presenting any symptoms at all. Shortly into their partnership, Roxie began to have nasal discharge. There was no wheezing or coughing -- more obvious signs of respiratory challenge -- but Jane knew the runny nose could indicate trouble. She works for her sister, a small animal veterinarian and horse enthusiast, and knows to take even seemingly insignificant symptoms seriously.

Jane took Roxie Ann to Dawn Mrad , DVM, at Mid-Rivers Equine Centre in Wentzville, MO, to get a full work-up on her respiratory system’s status. An endoscopy exam revealed the telltale asthma sign: inflammation in the respiratory tract. Inflammation is the body’s response to tiny particles that settle and irritate the lining of the airways and lungs. The more inflammation, the more it restricts the horse’s ability to get oxygen in and out and through the gaseous exchange region between the lungs and the blood stream.

Fortunately, Jane’s proactive response enabled Roxie’s condition to be caught in its early, mildest and most manageable stage.

Soaking hay was suggested to reduce the dust, but Jane knew she could do better by her horse. Soaking does reduce dust, but it can also increase the bacteria content and promote mold growth. Plus, it’s a water-wasting mess with toxic effluent that Jane didn’t want to be dumping at her home stable or the beautiful camping grounds she and Roxie enjoy.

Jane’s sister had a Haygain Hay Steamer that had not been in use since her horse passed away. After a month of Roxie getting Steamed Hay, Dr. Mrad could hear the improvements in the mare’s breathing, Jane relays. Hence, Jane’s dedication to making sure the mare always has it at home and on their camping adventures.

Even though it was diagnosed as a mild case, Roxie’s asthma is being managed in the systematic way “that an accountant would manage their horse’s asthma,” Jane reports. The mare gets Alaria supplement, Vitamin E, and the oral antihistamine Cetirizine to help manage her allergies. While Haygain steaming reduces most of the allergens in Roxie’s hay, the environment contains other sources of allergens. “The grass and pollen make her very itchy,” Jane explains. 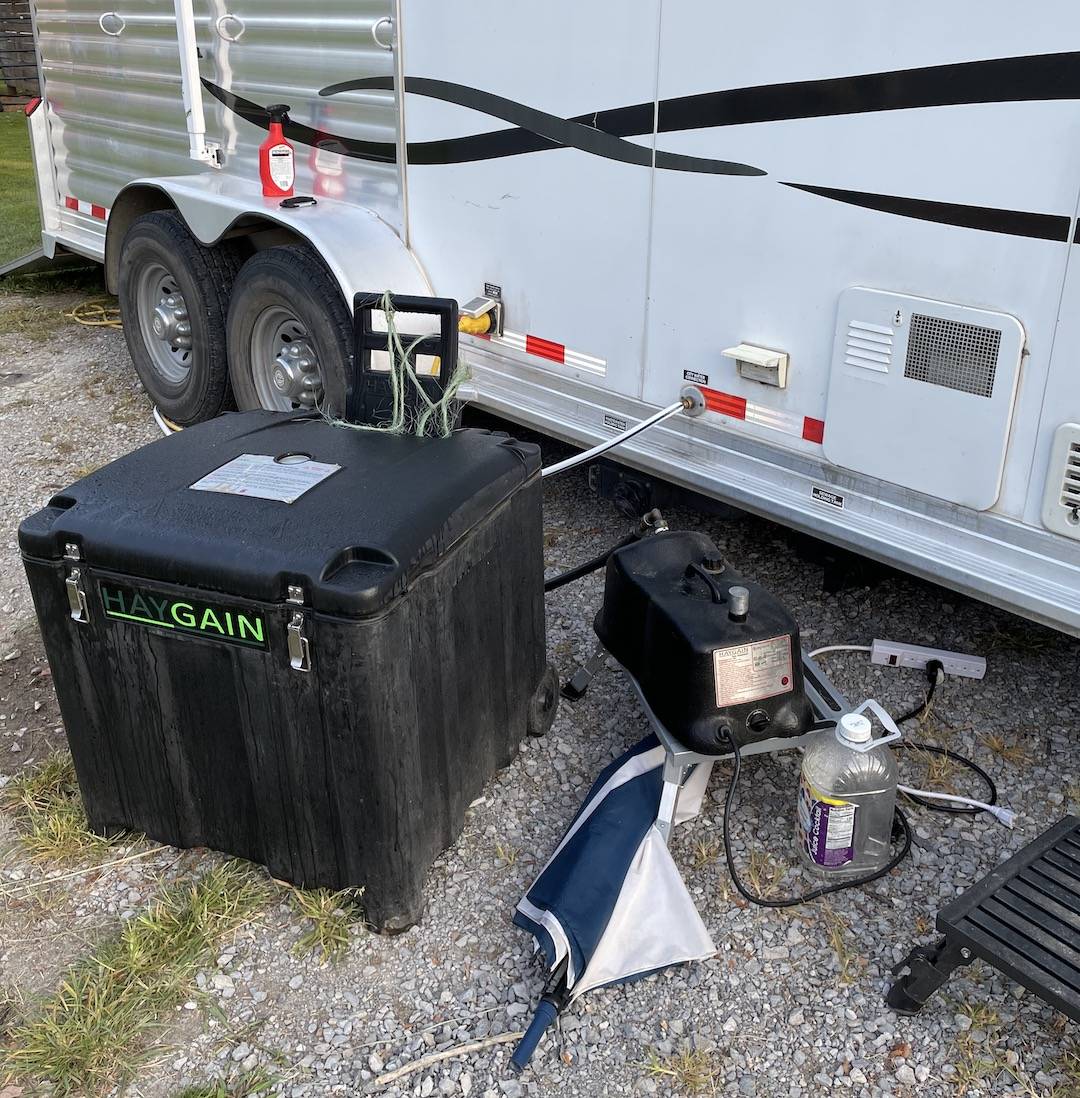 Most importantly, Jane carefully thought about Roxie’s environment from a respiratory health perspective. She lives in an in-and-out stall with a generous covered paddock that’s great during the warmer months. Even when their St. Louis-area winters mandate indoor living, Steamed Hay means there are fewer respirable particles in Roxie’s breathing zone. Having the whole place to herself eliminates the respirable dust that floats in from neighboring horses’ enclosures. Maintaining a ship-shape stable with good ventilation is another common sense priority employed at Roxie’s residence.

Missouri’s cold winters are no match for Jane’s Haygain Hay Steamer and a little of her husband’s ingenuity. ‘He built me a foil bubble wrap kind of box for the steamer to help it stay warm and protect it from extreme temperature changes.” The steam generator unit and its hoses and fixtures are drained carefully after use to ensure that residual water doesn’t freeze and clog the flow of steam.

Jane and Roxie have enjoyed 10 camping trips so far this year and look forward to many more. “Missouri has some of the best trail riding around,” she asserts. Greensfelder Park, right near her home in Wildwood, MO, is one of their favorites. The pair are often out for five- or six-hour rides, up and down hills, over uneven terrain and generally “working up a sweat,” Jane explains. She knows first-hand that it’s not just fancy show horses that need peak respiratory health to do their job comfortably and enjoy it.

As for Roxie, she may be as clueless as their campsite neighbors in knowing why Steamed Hay is important. But she knows that she loves it. “She adores it,” Jane shares. “She likes a nice hot meal. Don’t we all?”