Maryam’s quest for knowledge took her online, where queries on several topics led to Haygain.

California horsewoman Maryam Edah-Tally is a natural born educator. Giving a tour at her Tally Riding Academy in Southern California, she pop-quizzes her students:

How many gallons of gastric acid does a horse produce every day?

What’s the longest a horse should go without eating?

What are early signs of Cushings Disease? 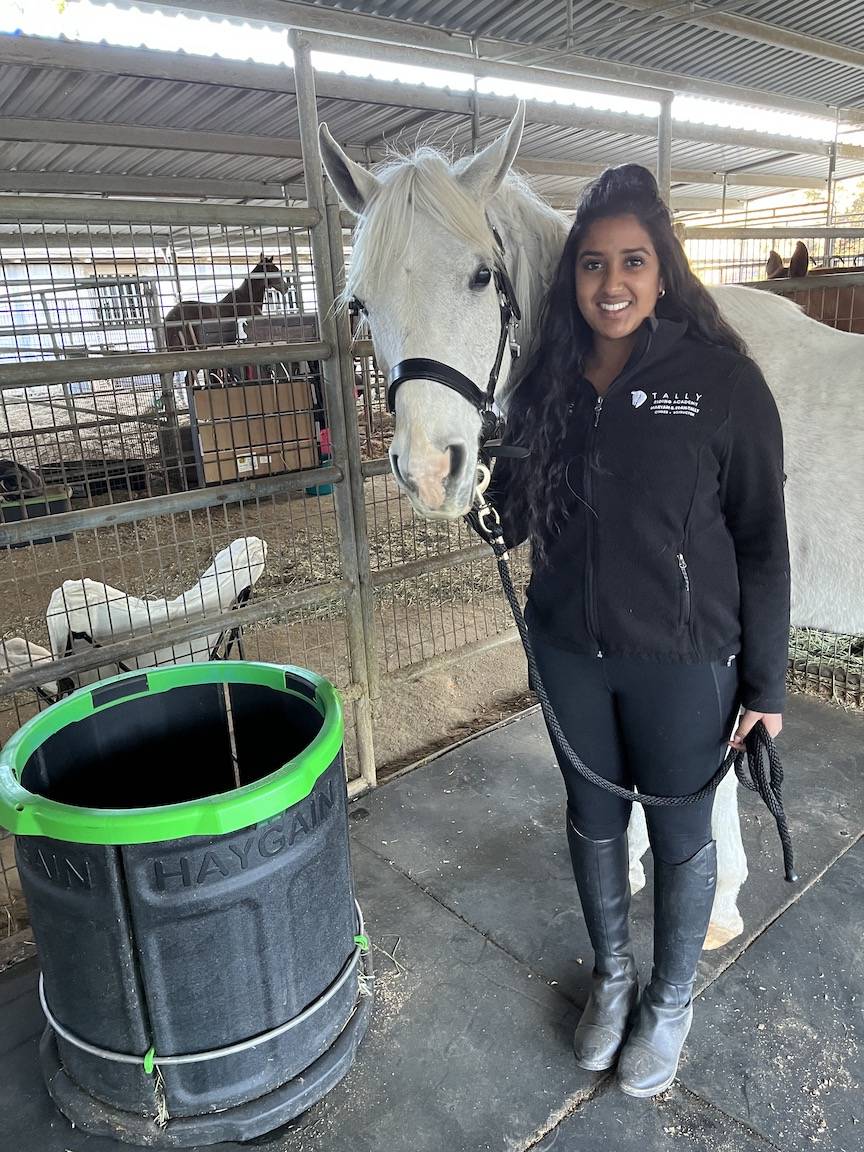 The 22-year-old professional’s passion for horses is matched only by her passion for knowledge about how to best care for them. Maryam shares the knowledge with enthusiasts of all ages and abilities in her Academy and with anyone else curious.

That quest for knowledge took her online, where queries on several topics led to Haygain. Last spring, Maryam’s interest became urgent: her 22-year-old Arabian, Ares, suffered a mild colic and she didn’t want it recurring. Knowing that chewing produces saliva that’s critical to neutralizing the ever-present acid in a horse’s stomach, she sought help ensuring he’d spend more time eating. Hay nets were tried until she learned that “They can cause crest pain and top line deformation.”

The Forager Slow Feeder by Haygain seemed a better option and has proven to be ideal for Ares. Along with the digestive benefits of having access to forage all day, Ares’ behavior is “much improved,” Maryam relays. The Arab she helped bring back from slaughter-ready status “can get a little sassy sometimes, especially at feeding time.”

Now in his sixth year with Maryam, he’s a teacher of able-bodied riders and individuals participating in equine-assisted therapy programs. When those sessions happened at mealtimes in the past, he was not happy. Food scarcity reactions can underpin nervous behaviors in domestic horses, but Ares no longer displays any since the Forager was added to his paddock.

Maryam notes that in many boarding situations, horses are fed twice daily. “On average it takes a horse 2.5 hours to eat a full flake of hay, leaving a lot of hours in the day when stomach acids build up.”

Ares is now one of three horses at Maryam’s base, the Anaheim Hills Saddle Club, happily nibbling out of Foragers. She notices that all three fret less around feeding time. They’re not the horses pawing the ground and banging the pipe corrals at mealtimes. “Eating is a brain activity: it keeps them busy.”

A few months later after the Forager came, Maryam and a friend and stablemate, Denise Molle, teamed up to buy a Haygain HG One High Temperature Hay Steamer. For Ares, Steamed Hay’s lowered dust content and increased water content is a good colic safeguard.

“It was divine timing,” Denise says of Maryam mentioning her interest in a Haygain High Temperature Hay Steamer. Even without the choking incidents, Denise worried that soaked hay didn’t have the needed nutrients and saw signs that dry hay irritated parts of Dakota’s nasal passages that were affected by the surgery.

Trial and erring hopeful solutions led some friends to consider her “crazy,” Denise recalls. “But I said, ‘No, we are going to save this boy!” Steamed Hay has helped her do that. Dakota is breathing easy and resuming his life as a trail partner through the beautiful hills that surround the facility. 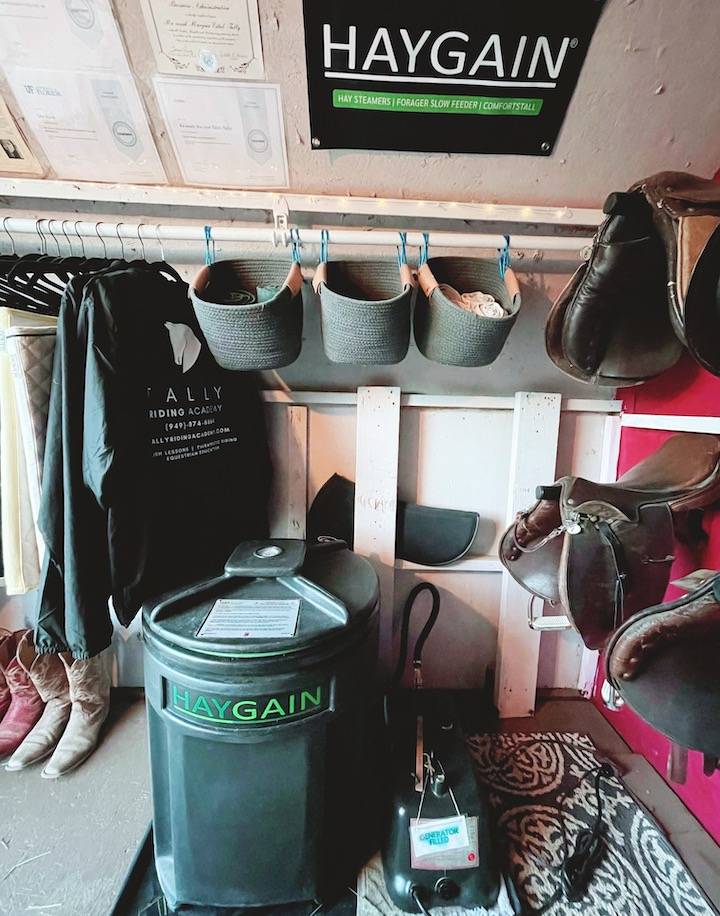 Maryam and Denise partner in the daily steaming duties: Denise in the mornings and Maryam in the afternoons. They take meticulous care of the steamer. “It’s our gold!” Denise asserts.

Maryam feeds Ares and a client’s Andalusian pony Steamed Hay for its overall benefits to respiratory and digestive function and appetite. She’s had fun doing taste tests with Ares in which Haygain is always the clear favorite over dry hay.

The Forager and Hay Steamer have helped more than Maryam’s horses. “The Forager has saved me time, money, stress and given me peace of mind.” The combination of appealing Steamed Hay, served in The Forager, has helped her nearly halve her monthly hay purchases thanks to less waste.

As an educator, Maryam appreciates the extensive research and educational content that support Haygain’s horse health equipment. It’s all become part of her horsemanship curriculum working with able-bodied students and those with a range of physical and occupational challenges. All are introduced to Haygain Steamed Hay and the Forager and taught their benefits.

Maryam doesn’t offer the 45-minute riding-only lessons offered at many public equestrian facilities. At Tally Riding Academy and Tally Therapeutic Riding, she has a fast-growing clientele that appreciates her “buckets to bridles” dedication to developing knowledgeable, well-rounded horsemen. The Academy’s two-hour sessions include all aspects of horse care, nutrition, equipment, etc. One 5-year-old student regularly runs the Hay Steamer as part of her prep for afternoon lessons.

Barefoot farrier care, bitless bridles and letting whiskers grow long are manifestations of Maryam’s desire to maintain horses in as close to their natural state as possible. The Haygain Way, she asserts, aligns nicely with that priority.